Female genital mutilation (FGM) and child marriage are illegal in Uganda and Kenya, yet the practices persist. A fourteen-year-old Ugandan girl and five others, were allegedly lured into Kenya at the height of the Covid-19 pandemic. The perpetrator was a friend who lied and tricked them by saying they were going to visit her grandmother across the border in Kenya. Three of the girls escaped and went to the local chief, who rescued them and took them to the assistant county commissioner who connected the girls to the police in Amudat.

Within the Pokot community, girls who have undergone FGM are deemed ready for marriage, and are removed from school. Estimates from 2020 found that in six districts of Uganda, where the practice is common - including Amudat - more than 26% of women and girls between 15-49 years of age, have been subjected to FGM - the national average, by contrast, is 0.3%.

The UN Population Fund (UNFPA) and the UN International Children's Emergency Fund (UNICEF) are working with community leaders to address these concerns through the Joint Programme to End FGM and the Global Programme to End Child Marriage. Flavia Kabahenda Rwabuhoro, chairperson of the parliamentary committee on gender, labour and social development, said a number of policy documents and legal frameworks will be reviewed, to address existing gaps so that the government can come up with a plan and programmes. She acknowledged that laws alone will not address the issue of gender-based violence - budgets have to be allocated to solutions, education must be available for girls, and attitudes must change. 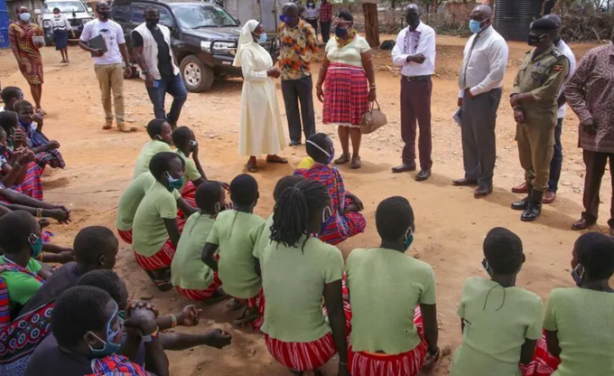 A delegation of state ministers and district leaders speak with girls at Kalas primary school in Amudat. The school is a safe haven for the girls fleeing female genital mutilation, child marriage or both.