Namibia has halted Russia's state atomic energy agency's uranium exploration over concerns about potential contamination of underground water, writes Vitalio Angula for Voice of America. The nation is the second-largest producer of nuclear fuel in the world and, in 2019, granted Russia's Rosatom subsidiary, One Uranium, exploration rights. However, a  local subsidiary, One Uranium, still requires a water use permit to begin mining.

Namibia's Minister for Agriculture, Water, and Land Reform Calle Schlettwein said no further permit would be granted because the method of mining the company proposed, known as the in-situ leaching, was raising environmental concerns.

In-situ mining involves recovering minerals by dissolving them in an acid pumped into the ground and then pumping the solution back to the surface. Schlettwein said farmers in Namibia's eastern Omaheke region had petitioned against the technique.

Schlettwein went on to say that the in-situ technique also poses a risk to groundwater, a resource essential to staving off frequent droughts and one the International Atomic Energy Agency Namibia's Ministry of Agriculture, Water and Land Reform and Germany's Institute of Geosciences and Resources have sought to protect to ensure a year-round supply.

"The permits that we'd given had conditions to make sure that we can monitor the activities and that we can ensure ourselves continuously that no risk to the aquifer is happening," Schlettwein said. "Now, unfortunately, the company did not conform to the conditions and we have now suspicion that the mining operation, which is called in-situ leaching ... mining, in fact, I see there is risk to the aquifer by polluting it."

Retired geologist Roy Miller says allowing in-situ mining could create the perception that Namibian water, meat, fruit, and vegetables might be contaminated. Mine solutions do escape because of improper operations, leaks, equipment breakdowns, borehole problems, and geological problems. Spreading mine solutions become a major threat to the safety of the drinking water way beyond the confines of the mine area," Miller added. 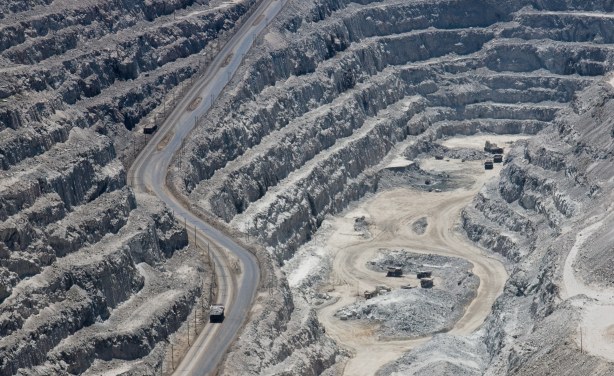 Rössing uranium mine, an open-pit mine near Arandis, a town in the Erongo Region of western central Namibia (file photo).