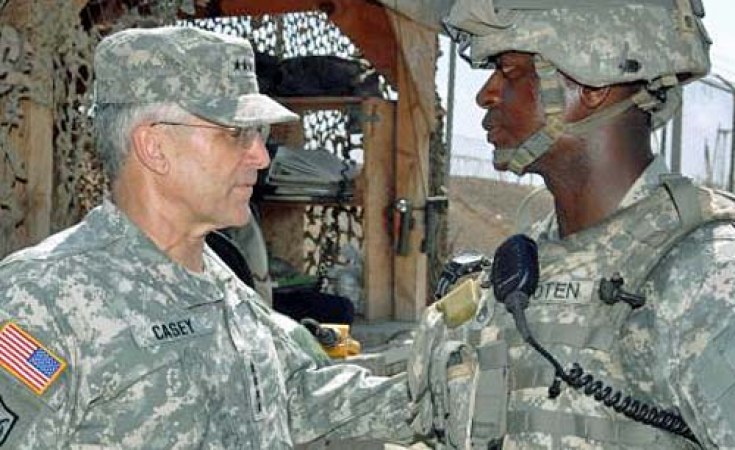 In May 2008, the United States Army War College in Carlisle, Pennsylvania, hosted "Unified Quest 2008," the army's annual war games to test the American military's ability to deal with the kind of crises that it might face in the near future. "Unified Quest 2008" was especially noteworthy because it was the first time the war games included African scenarios as part of the Pentagon's plan to create a new military command for the continent: the Africa Command or Africom. No representatives of Africom were at the war games, but Africom officers were in close communication throughout the event.

The five-day war games were designed to look at what crises might erupt in different parts of the world in five to 25 years and how the United States might handle them. In addition to U.S. military officers and intelligence officers, "Unified Quest 2008" brought together participants from the State Department and other U.S. government agencies, academics, journalists, and foreign military officers (including military representatives from several NATO countries, Australia, and Israel), along with the private military contractors who helped run the war games: the Rand Corporation and Booz-Allen.

One of the four scenarios that were war-gamed was a test of how Africom could respond to a crisis in Somalia — set in 2025 — caused by escalating insurgency and piracy. Unfortunately, no information on the details of the scenario is available.

Far more information is available on the other scenario — set in 2013 — which was a test of how Africom could respond to a crisis in Nigeria in which the Nigerian government is near collapse, and rival factions and rebels are fighting for control of the oil fields of the Niger Delta and vying for power in the country which is the sixth largest supplier of America's oil imports.

The list of options for the Nigeria scenario ranged from diplomatic pressure to military action, with or without the aid of European and African nations. One participant, U.S. Marine Corps Lieutenant Colonel Mark Stanovich, drew up a plan that called for the deployment of thousands of U.S. troops within 60 days, which even he thought was undesirable. "American intervention could send the wrong message: that we are backing a government that we don't intend to," Stanovich said. Other participants suggested that it would be better if the U.S. government sent a request to South Africa or Ghana to send troops into Nigeria instead.

As the game progressed, according to former U.S. ambassador David Lyon, it became clear that the government of Nigeria was a large part of the problem. As he put it, "we have a circle of elites [the government of Nigeria] who have seized resources and are trying to perpetuate themselves. Their interests are not exactly those of the people."

Furthermore, according to U.S. Army Major Robert Thornton, an officer with the Joint Center for International Security Force Assistance at Fort Leavenworth, Kansas, "it became apparent that it was actually green (the host nation government) which had the initiative, and that any blue [the U.S. government and its allies] actions within the frame were contingent upon what green was willing to tolerate and accommodate."

Among scenarios examined during the game were the possibility of direct American military intervention involving some 20,000 U.S. troops in order to "secure the oil," and the question of how to handle possible splits between factions within the Nigerian government. The game ended without military intervention because one of the rival factions executed a successful coup and formed a new government that sought stability.

The recommendations which the participants drew up for the Army's Chief of Staff, General George Casey, do not appear to be publicly available, so we don't know exactly what the participants finally concluded. But we do know that since the war games took place in the midst of the presidential election campaign, General Casey decided to brief both John McCain and Barack Obama on its results.

The African Security Research Project has prepared reports providing detailed information on the creation, missions, and activities of Africom. In particular, they reveal that neither the commander of Africom, General William Ward, nor his deputy, Vice Admiral Robert Moeller, are under any illusions about the purpose of the new command.

Thus, when General Ward appeared before the House Armed Services Committee on March 13, 2008, he cited America's growing dependence on African oil as a priority issue for Africom and went on to proclaim that combating terrorism would be "Africom's number one theater-wide goal." He barely mentioned development, humanitarian aid, peacekeeping or conflict resolution.

And in a presentation by Vice Admiral Moeller at an Africom conference held at Fort McNair on February 18, 2008 and subsequently posted on the web by the Pentagon, he declared that protecting "the free flow of natural resources from Africa to the global market" was one of Africom's "guiding principles" and specifically cited "oil disruption," "terrorism," and the "growing influence" of China as major "challenges" to U.S. interests in Africa.

Since then, as General Ward has demonstrated in an interview with AllAfrica, he has become more adept at sticking to the U.S. government's official public position on Africom's aims and on its escalating military operations on the African continent.

These activities currently include supervising U.S. arms sales, military training programs and military exercises; overseeing the growing presence of U.S. naval forces in the oil-rich Gulf of Guinea and off the coast of Somalia; running the new U.S. base at Camp Lemonier in Djibouti; and managing the array of African military bases to which the United States has acquired access under agreements with the host governments of African countries all over the continent. These countries include Algeria, Botswana, Gabon, Ghana, Kenya, Mali, Morocco, Namibia, São Tomé, Senegal, Sierra Leone, Tunisia, Uganda, and Zambia.

We can only wonder what Barack Obama thought of the war game and what lessons he learned from General Casey's briefing. One might hope that he came away with a new appreciation for the danger, if not the outright absurdity, of pursuing the strategy of unilateral American military intervention in Africa pioneered by Defense Secretary Robert Gates, who was retained as Defense Secretary by President Obama when he took office, and General Casey, who has also kept his job under the new administration.

But President Obama has decided instead to expand the operations of Africom throughout the continent. He has proposed a budget for financial year 2010 that will provide increased security assistance to repressive and undemocratic governments in resource-rich countries like Nigeria, Niger, Chad, the Democratic Republic of Congo, and to countries that are key military allies of the United States like Ethiopia, Kenya, Djibouti, Rwanda and Uganda.

And he has actually chosen to escalate U.S. military intervention in Africa, most conspicuously by providing arms and training to the beleaguered Transitional Federal Government of Somalia, as part of his effort to make Africa a central battlefield in the "global war on terrorism." So it is clearly wishful thinking to believe that his exposure to the real risks of such a strategy revealed by these hypothetical scenarios gave him a better appreciation of the risks that the strategy entails.

Daniel Volman is director of the African Security Research Project in Washington, DC and a member of the board of directors of the Association of Concerned Africa Scholars. He has been studying U.S. security policy toward Africa and U.S. military activities in Africa for more than 30 years.

Africom to Continue Under Obama

Africom and the Obama Administration

Previous Story
Tagged:
Copyright © 2009 allAfrica.com. All rights reserved. Distributed by AllAfrica Global Media (allAfrica.com). To contact the copyright holder directly for corrections — or for permission to republish or make other authorized use of this material, click here.