Africa: Stuff is Cool, If You're a Materials Scientist 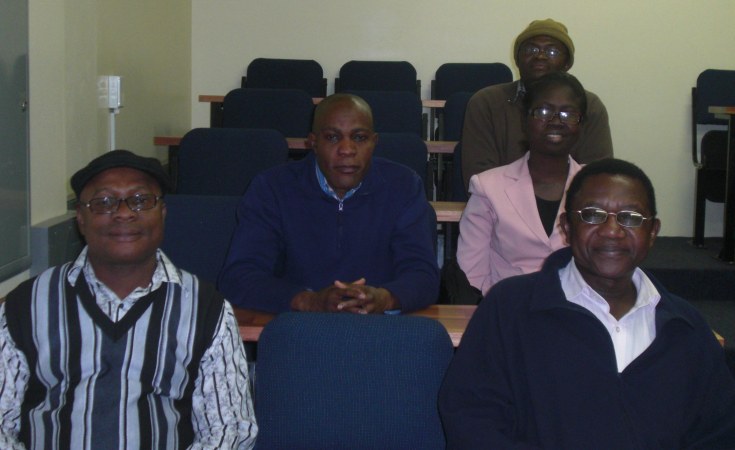 If postgraduate students at the Pan-African School of Materials (Pasmat) are asked what they're studying this month, they aren't being flippant if their answer is "stuff". That's because the field of materials science is often referred to as "the science of stuff".

Calling it "stuff", however, doesn't mean it's easily - or briefly - defined. An educational kid's site - StrangeMatter puts it this way: "Understanding how [everything you use every day] is put together, how it can be used, how it can be changed and made better to do more amazing things - even creating completely new kinds of stuff: that's what materials science is all about."

Nearly two dozen masters and doctoral students in science and engineering are attending the Pasmat course at the African University of Science and Technology (AUST) in Abuja, Nigeria, through mid-September.

Aerospace engineer Wole Soboyejo, who teaches at Princeton University in the United States, is an AUST advisor and this week's course lecturer. The topic: structural fatigue and fracture - or, in lay terms, what happens to matter when stressed.

To a non-scientist, it might sound esoteric, or even boring. But think of it like this; if you're in an airplane that hits an air pocket, you'd want the engineers who built the fuselage to have paid attention in that part of the course! "The tools that postgraduates acquire at Pasmat will prepare them for materials research, as well as future efforts to develop new materials," Soboyejo told Research Africa, a professional body for African government and institutional policymakers, researchers and research managers.

The second week of training is being presented by Professor Lesley Cornish, assistant dean of - get ready for this - Research of the Faculty of Engineering and the Built Environment at South Africa's University of the Witwatersrand (Wits), who will cover basic materials concepts required for the calculation of phase diagrams in materials science and engineering. If you're not a scientist and want to be even further confused, take a look at this YouTube video.

On the other hand, you could just think of the airplane again. You really do want the builders to be able to calculate how complex mixtures of metals will respond under varying conditions. And wouldn't it be nice if African scientists come up with innovative uses of materials to solve old or emerging problems of contemporary life?

When she's not fully occupied with being dean of a university department whose name you can't remember, Cornish is also the director of one of the Pasmat partner groups, the African Materials Science and Engineering Network (Amsen), which aims to improve skills in materials science and engineering. One of the potential results of that work is to add value to Africa's extensive mineral deposits. And that matters - a lot - to Africa's future.

Oxford economist Paul Collier, in his recent book 'The Plundered Planet', writes that "the failure to harness natural capital is the single-most important missed opportunity in economic development". In an interview with AllAfrica, Collier added that the "resource discoveries which are now happening in Africa are the biggest opportunity for good that Africa has ever had and is likely to have in our lifetimes". If Amsen-related faculty and students help increase the utility of the continent's natural resources - retaining more of the value - the investment in science education would be enormous.

Amsen has branches at the universities of Botswana, Namibia and Kenya, as well as Nigeria's Federal University of Technology in Akore (FUTA) as well as at Cornish's university, Wits in Johannesburg. Amsen is one of five networks in sub-Saharan Africa funded by the Carnegie-IAS Regional Initiative in Science and Education (RISE). The goal is to strengthen higher education in sub-Saharan Africa by preparing new faculty to teach in African universities and upgrading the qualifications of current faculty.

Professor Cornish is pleased that three of her students from the Amsen network will be taking part in the Pasmat course, which is a collaboration between AUST-Abuja and RISE-Amsen. Cornish's students are Nigerian Adenike Olaseinde, winner of the Tata Africa Scholarship for women scientists, who was a lecturer at FUTA before coming to Wits; another Nigerian materials scientist, Apata Ayodeji, who taught at the Department of Metallurgical & Materials Engineering at the Federal Polytechnic of Idah in Nigeria's Kogi State; and Kenyan Bernard Odera, who lectured at the University of Nairobi. All the Amsen postgraduate students will return to their home institutions when they have completed their PhDs.

The rationale for the workshop is to provide training that will allow students to undertake research, with topics chosen so as to be applicable for many research topics, such as alloy development, corrosion, materials development and beneficiation - or enhancing the value - of local resources, said Cornish. She said the research is important not only as the basis for local industries, but also to make existing products last longer.

"Some places in southern Africa, which by tradition have simply exported raw minerals with no value added, are finally developing truly advanced technologies and applications for these minerals," said Alan H. Anderson, a consultant for the Science Initiative Group based at the Institute for Advanced Study in Princeton, New Jersey, which implements the RISE program. "The Amsen program at Wits is one of the best examples of this."

Professor Cornish says she encouraged her students to use the opportunity of attending the Pasmat course to discuss their research problems with other materials scientists. "I'm developing alloys that have high strength in aggressive environments," Cornish said. "I've got students working on steels and cermets (materials used for machining tools) on research which will contribute to the mining sector and other areas where high temperature alloys are used, like in turbine engines, and also in the petrochemical industry."

She says an alloy she and her students are working on can withstand high temperatures more effectively than materials currently used, e.g. those that are nickel-based. What's more, she says that because less fuel will be needed, the result is not only cost savings but less pollution.

Professor Cornish is also director of the Centre of Excellence in Strong Materials, funded by the South African government's Department of Science and Technology and the National Research Foundation. But for all her scientific cred, while listening to the "scientists of stuff" as they chat about their mentor, they can be overheard referring to her in a more typically African tribute to a strong woman - as "Mama Cornish".

Tami Hultman contributed to this article.

Tagged:
Copyright © 2011 allAfrica.com. All rights reserved. Distributed by AllAfrica Global Media (allAfrica.com). To contact the copyright holder directly for corrections — or for permission to republish or make other authorized use of this material, click here.