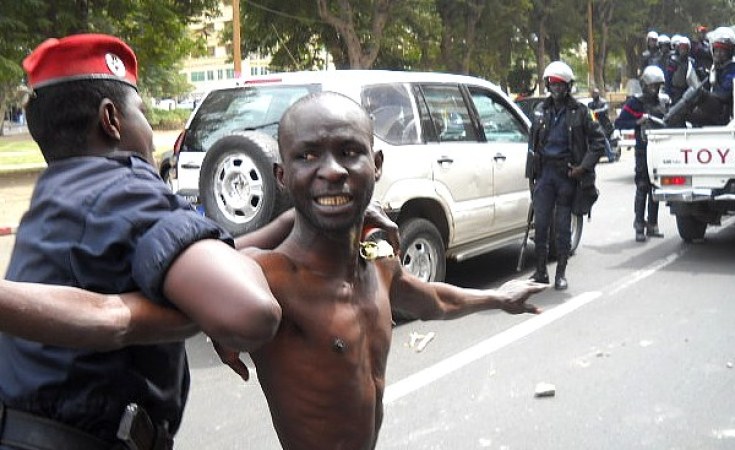 Dakar — Senegal faces a tense build-up to the presidential election next Sunday, with opposition candidates planning new protests in the wake of a week of clashes on the streets of the country's cities.

The incumbent, 85-year-old President Abdoulaye Wade, is running for a third term as president, arguing - with the support of the country's Constitutional Council - that the two-term limit in the current constitution does not apply to him because his presidency pre-dates its introduction.

But his determination to run has sparked widespread opposition, and parts of Dakar have been transformed into a war zone in recent days.

The downtown area is flooded with police, who have taken over Independence Square in an effort to stop opposition candidates from organizing any form of march or demonstration against Wade.

Clashes between heavily-armed security forces and the stone-throwing youth of the M23 movement - a grouping of opposition political parties and civil society organizations opposed to a third term - can be witnessed on street corners.

In other areas, the city resembles a ghost town, and tension is mounting in the heart of the capital, where business has been disrupted by protests and clashes.

Violence erupted during the second week of Senegal's electoral campaign last week, largely in clashes over demonstrations organized by candidates and members of M23 at Independence Square on February 17 and 18. The prefect of Dakar imposed a ban on the protests, confrontations ensued between police and crowds, and many were wounded.

Confrontations have also taken place in other parts of the country. In the inland city of Kaolack, south-east of Dakar, one person was reported dead.

Cheikh Bamba Dièye, who is parliamentary and mayoral representative of the city of Saint-Louis, north of the capital, was pulled by the neck and dragged on the streets by three officers. He is suffering from trauma and is under surveillance at the main hospital in Dakar. His convoy came under attack from the police ahead of a demonstration, but he managed to appear at Independence Square despite the ban.

Ibrahim Fall took part in protests without authorization from the prefect of Dakar. Although the authorities say permission needs to be sought for demonstrations, the opposition say this violates electoral laws. They are supported in this view by the head of the electoral commission, Doudou Ndir. However, Ndir seems powerless in the face of other government officials.

The determination of the police to break up protests reached a peak on Friday, when they threw a teargas grenade inside a mosque, allegedly in an effort to drive out a group of youths who had taken refuge in it.

This led to a revolt by Muslims, who were preparing for Friday prayers and decided to occupy the streets to protest what they saw as an act of disrespect. They were quickly dispersed by police with teargas, but the act has generated much anger in other towns.

The death of 22-year-old Mara Dieng in Kaolack brings the death toll in election-related unrest to six. On January 30, a student, Mamadou Diop, was killed by police. On January 27, a police officer, Fodé Ndiaye, was killed by a rioting crowd, and three other people were killed in Podor in northern Senegal.

Also during the election campaign, President Wade's election caravan was attacked in the stronghold of Ousmane Tanor Dieng, candidate for Benno ak Tanor, who himself has been attacked by stone-throwing youths in Dakar.

Two members of a group of anti-government rappers, Yen a marre, were arrested and spent 24 hours in police costody for breaching administrative edicts. They will have to appear before a magistrate this week.

But in the meantime, opposition and government camps are gearing up for another showdown this week: Idrissa Seck, a candidate of IDY4PRÉSIDENT is planning another protest on February 22 and 23, three days before voting on February 26.

Previous Story
Next Story
Violence Continues in Lead-Up to Polls

Violence Continues in Lead-Up to Polls