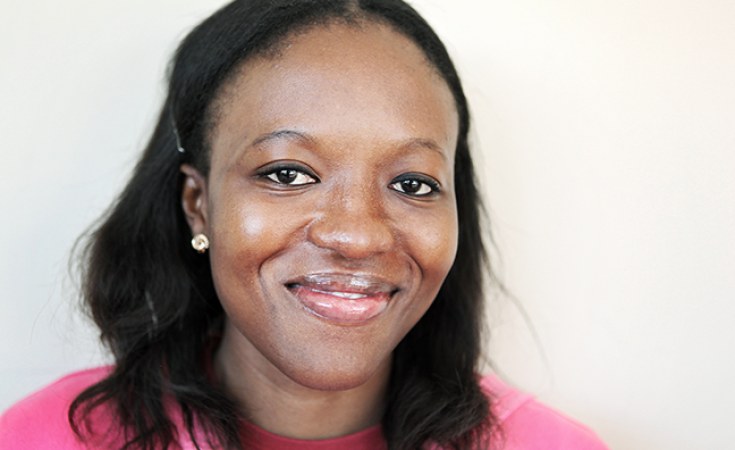 In Ghana most girls are expected to go to a decent school, find a well-paying job, then seek out a husband - not many women pursue careers in male-dominated fields like computer science and information technology. Social entrepreneur and winner of an Aspen Institute 2013 New Voices Fellowship, Regina Ayare, hopes to change that. After graduating from Ghana's Ashesi University at the top of her class, Ayare immediately advanced to a well-paying position at a renowned international bank where she was the only woman in the IT department. Realizing there was more she could do with her skills, Ayare quit her job and founded Soronko Solutions to introduce technology to rural schools in Ghana. Technology shows students at a young age how to be innovative problem solvers, skill sets they'll need when searching for future jobs. Tech Girls for Change, another initiative Ayare launched, strives to introduce technology to young girls in a fun way, encouraging them to pursue higher education in these fields. a Ayare recently sat down with All Africa's Rohita Javangula to discuss the impact of technology in rural communities in Ghana and her personal experiences as a woman working in a male-dominated field.

Tell us about Soronko solutions.

Basically we are about using basic math and technology to drive human potential and how we do that is in two forms. The first part is we develop a technology solution for small- and medium-scale enterprises in Ghana and we work with children in the rural community to introduce them to the science and engineering market. So, an example would be we go to the rural areas and we pick a particular problem and the kids work at solving it using the skills they've learned in class. Another example is when we went to a school for the deaf and we worked with deaf girls and built apps that would help them communicate.

What difference do you think technology makes in the rural communities?

It allows the children to express their creativity. Normally in Ghana education is based on rote memorization because of a lack of trained teachers, a lack of resources. Education is about the students reproducing the information fed to them. They aren't allowed to ask questions or to form their own interpretation. There are very few resources when it comes to the fields of science and technology; it's all just theory. It isn't practical. For example, say they're learning about something like semi-conductors. The little battery cell can be solar-powered which can power a light source in the house. They need to be able to make these connections, but they are just learning so they can pass the exam. So that's one of the main challenges. You don't hear of great scientific or technological innovations coming from Africa or from Ghana. That's one of the things we're trying to change. We are blessed with so many natural resources and so much human potential. We don't know what to do with all we have. We just can't yet connect the dots.

When introducing these new technologies in schools in rural communities, do you face any opposition from the teachers or administration?

Initially I thought everybody was going to embrace these new technologies. They'll see how it's going to bring about change, but interestingly enough it can be a scary concept to the teachers and the people in the community. That was the first challenge. So we needed to demystify technology. Some people thought it would be too much and the kids wouldn't understand any of it, that it was a waste of time. I feel like it's because the technology is new. So when you're trying to bring about change, people are thinking, ‘This is not necessary. There are bigger problems.’ What they fail to understand is we need to build a tool to fix the problem.

So how did you overcome this opposition?

We hosted these pilot presentations and we would invite the village chief. This was very important. When you go to a rural community, if you get the support of the chief in the community he in turn will speak to the village elders who in turn will speak to the people in the community and then they will be much more welcoming. So we include the village chief in every project. When we take our electronic gadgets, laptop, tablet we introduce the games that we have - some math and vocabulary games. We have some games that are in the local languages. We have some games that teach you about science and we take the chief and elders through the whole program just to show them what we are coming to do and to explain it to them.

When you graduated university you received a job at a well-known international bank, so what prompted you to change gears and pursue social enterprise instead?

I had a personal experience when I was a kid. There was this movie on TV and it was about a man who had a rocket and was able to fly, and I had never traveled outside of Ghana and I thought to myself, ‘I want to build a rocket.’ At that time, my dad had just gotten a computer with Internet so I did some research about rockets and designed something that I thought would work. I took the design to my physics teacher and said, ‘You know, I think I can build a rocket.’ And he told me that was impossible and my reaction was, ‘Impossible? I just saw it on TV.’ And he just told me that it wasn't on the curriculum and that we didn't have time to learn about all that. So, I shelved my rocket design and went ahead and continued studying.

After school I really wanted to follow my passion and do something impactful. Ghanaian girls have to follow a certain tradition with school, graduation, getting a good job, finding a good husband. Stepping out of that mold was not easy. At the beginning, I didn't really want to stand out. I just did what was expected of me. I got a good job at an international bank in the IT department, but I wasn't happy. Every time we would try and push new technology, people didn't really get it. There were lots of gaps in information. One day I said that I was just going to quit my stable job and follow my passion. There's never the right moment so I just encouraged myself and I just quit.

What was it like being one of the only women in your field? What sort of challenges did that pose?

In my class at university there were only three females out of 15 in the class. At the job I received when I graduated, I was the only female in the IT department. That was very difficult. You're essentially joining a men's club. One of the biggest things I had to learn was how to deal with the male ego. In order to be considered a team player I had to know when to speak and when not to speak. I just couldn't fully be myself because or I'd be seen as trying to show off. I always had to prove myself, which I found irritating. Every time I tried to speak out people would question me just because I'm a female.

One of the other things is not being taken seriously. I’m in a meeting and every time I say something, especially around an older crowd, they would ask me if I was sure about what I was saying. At that point in time I was even turned down a promotion because they told me I looked too young. I knew the reason they said I looked too young was because they couldn't say it was because of my gender.

Actually one of the things my organization does is run a program called ‘Tech Needs Girls Ghana’ and we try and get more females involved through a mentorship and a training program. We have eight mentors who are all females working in technology and we take a group of girls and we mentor them and teach them how to code. Normally, most of these IT trainings are how to use Gmail or how to appeal to the consumer. But we teach the girls from the creating point. We teach them how to code and create mobile apps. We are currently working with a group of girls who are working on building an app for their school. So we are trying to get more females in the technology field. I was showing them inspirations. I was showing them role models. I was showing them mentors, just telling them that they can.

How has the Aspen Fellowship helped you or challenged you so far?

When I found out I was a fellow, I was very excited. The reason is when I read the profiles of the other fellows I was even more excited because I was going to be part of a community among other people who are doing wonderful things in their own countries. Then when I met the director and Rachel Strecher [of Aspen Global Health and Development], they were really great. They completely got the program. They knew what it took to run a very successful program in terms of getting new voices, getting us to be able to speak to the issues that we were working on.  And the training session was beyond my expectations. I learned so many different things. I learned how to communicate effectively. I also learned how to interact with the media. We did a lot of training on radio and TV and body language even on how to share your message. We also got to hear about what the other fellows are doing. So all around it was a great experience. It really helped.