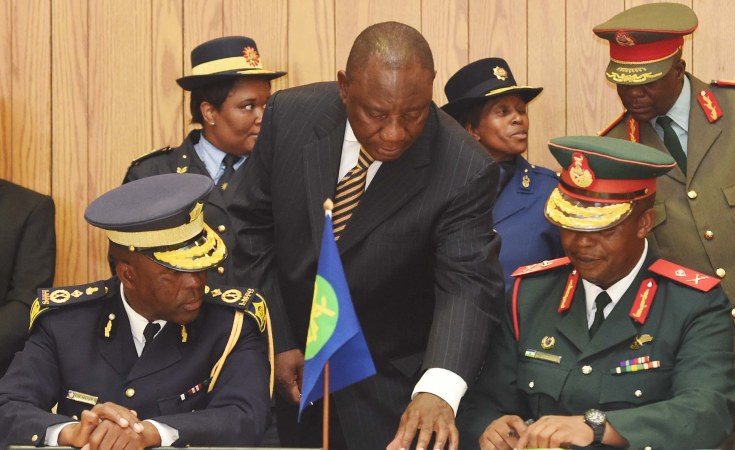 Almost a month after the release of the report of a Southern African Development Community (SADC) inquiry into political instability in Lesotho, many citizens remain in the dark over both its contents and their implications for the future.

Led by Justice Mpaphi Phumaphi of the Botswana High Court, the 10-strong commission was established after a SADC leaders' meeting last July.

Following months of political and legal and wrangling, its report was finally presented to Lesotho's National Assembly and Senate on February 8 and 10 respectively.

The leaders set up the inquiry after the killing last June 25 of former Lesotho Defence Force (LDF) commander Maaparankoe Mahao, by soldiers sent to arrest him for an alleged mutiny plot. The killing occurred after Mahao had been replaced as commander by Lieutenant-General Tlali Kamoli.

The commission was mandated, among others, to review investigations into the alleged mutiny plot by elements of the LDF, and Mahao's role in it, to investigate the circumstances surrounding his killing, and to identify wrongdoing with a view to bringing perpetrators to justice.

The commission was mandated to investigate the legality or otherwise of these changes to LDF leadership, and to examine the effect of Kamoli's reappointment on the unity and coherence of the LDF.

The Phumaphi Commission's report was meant for release in November 2015, but LDF Special Forces Commander Tefo Hashatsi launched a court case to annul the commission. A legal and political tussle between the Lesotho government and the SADC followed, with the government arguing that it could not receive the report because the legitimacy of the commission was being considered by domestic courts. But SADC resolved that it could not be bound by a ruling of the Lesotho High Court in the matter; and the case was subsequently dismissed by the court.

Meanwhile, Mosisili was ostensibly persuaded to receive the report by his fellow Southern African leaders at a summit in Botswana in January.

He then moved to table the report before Lesotho's legislature.

What did Pumaphi find and recommend; and what action has been taken to move the country out of the paralysis of governance and public political tension of the past year?

The commission challenged the veracity of the allegations that the plot existed at all: it found that mutiny suspects were tortured to confess and implicate others, and that Mahao's connection to a plot was doubtful.

The commission found that Mahao was subjected to persistent threats and attempts on his life, including on formal army occasions by senior soldiers. His arrest, and the arrests of others, were authorized by, or carried out with the full knowledge of Defence Minister Tšeliso Mokhosi.

But the minister had exercised no oversight over the army's action, nor had the army provided him feedback and updates.

It was further found that Mahao either did not resist arrest or did not offer resistance commensurate with the amount of force used to subdue and eventually kill him: he was confronted by no less than 10 heavily-armed soldiers and killed by three AK-47 bullets fired at close range. The commission cast doubt on the probability that he arrived in hospital both alive and able to walk.

Police Investigation into the killing of Mahao

The commission found that police investigations were hindered by Kamoli's refusal to hand over suspects and by the withholding of material evidence. It found in general that the LDF had been defying the rule of law.

Political killings and kidnapping of soldiers

The commission found that evidence provided to courts during habeas corpus applications indicated that some serving LDF personnel had been abducted in contravention of LDF procedures. But it found no evidence for political killings, with only the death of businessman Thabiso Tšosane fuelling public perception of a political motivation.

Legality of appointments and dismissals

Kamoli's reappointment and its effects

The commission found that Kamoli's reappointment perpetuated divisions within LDF, and that the flight of opposition leaders who feared Kamoli was a reflection of the country's instability.

The commission endorsed earlier reports which noted that mandate overlaps between police and the army caused conflict between the two institutions. It also found that the army and police were politicized, and identified the divergent political leanings of these institutions.

Key among the recommendations of the commission were that:

SADC mandated the government to produce a road map towards implementation of the commission's recommendations. As of the end of February, no discernible progress has been recorded.

The only step that Prime Minister Mosisili has taken is to present the report to Parliament, where he neither outlined its contents nor indicated what the intention of Government was towards processing, implementing or disseminating its findings and recommendations. Debate on his presentation is yet to take place in either House of the legislature.

This leaves the public and Lesotho's external partners in the dark over whether the report has provided the expected beginning of a process of resolving Lesotho's current crisis: it is business as usual in Lesotho.

Opposition leaders remain in exile and their war of words with government continues unabated in the media. Those still in Parliament remain suspended after their unruly behaviour during Mosisili's first attempt to present the Phumaphi report.

In the meantime, a series of "red-herring" debates have heightened controversy over the report, over issues such as whether the report has been watered down through the excision of names of people and whether the recommendations are now binding on government by virtue of their acceptance and adoption by SADC.

Prospects for the Future: More of the Same?

A number of factors, current and historical, cast doubt over whether Lesotho's political elite will take the opportunity that the Phumaphi Commission report provides to recalibrate governance and provide new legitimacy to national political processes.

This is despite calls from civil society quarters to speedily, resolutely and fully implement the recommendations. The calls have been manifest in open letters, public statements and position papers issued by no fewer than 20 such national bodies, including trade unions, professional and humanitarian organisations.

Thirdly, Parliament might choose to implement its recommendations only selectively. This possibility is heightened by the absence of the opposition from deliberations due to their continuing boycott of Parliament.

There is also a deafening silence from SADC, through its physical absence from Lesotho and through its failure to state its position after the January communiqué urging the government to act. Room remains for pressure from the region, not least by acknowledging progress made (if any) and by demonstrating continuing support for reform, especially by setting up the long-promised oversight mission.

Lastly, on whatever side the commission's report places the weight of blame, there is bound to be displeasure within society. Given the current depth of rancour and the prolonged wait for action, managing reactions is going to be a nightmare. Could this concern be what is paralyzing government?

In the current absence of leadership that is not bent on political point-scoring, the Phumaphi Commission is likely to continue being a political football for politicians, amidst a public still ignorant of its contents. Closure, reconciliation or identification of the way forward out of the current morass, all remain a fleeting illusion to be pursued but never attained.

Perhaps it is time for a visionary, uniting and organic leadership to emerge. Will Lesotho produce such a leader from the current crop of politicians?

Tšoeu Petlane is director of the Maseru-based NGO, Transformation Resource Centre. He writes in his personal capacity.