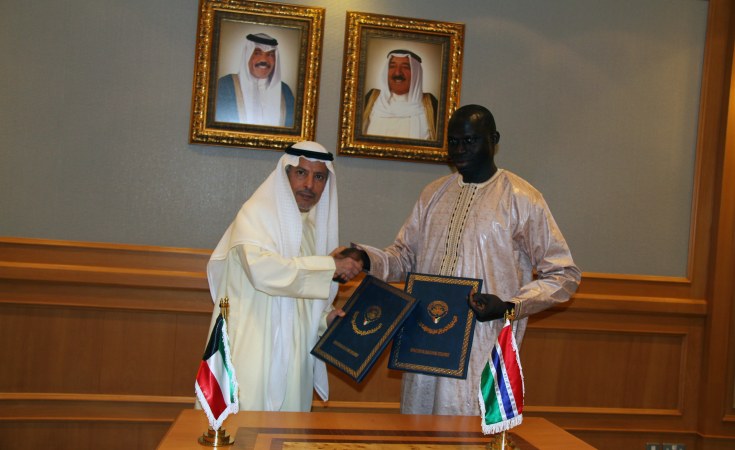 The Loan Agreement was signed by H.E. Abdou kooly - Minister of Finance and Economy , on behalf of the Islamic Republic of The Gambia, who also signed the Project Administration Agreement together with Mr. Dawada Samba Sovv ,on behalf of Gambia River Basin Development Organization.

Both the Loan Agreement and Project Administration Agreement were signed on behalf of the Fund by Mr. Hesham Al-Waqayan, Deputy Director-General of the Fund in attendance of Mr. Thamer Al-Failakawi, Regional Manager, West African Countries .at the Fund.

The project includes: construction, supply, and installation of two 225/30 kV substations in Soma and Brikama in the Gambia within the scope of the electrical interconnection project among the Gambia river basin states, along with construction, supply, and installation of medium and low voltage networks in villages nearby either substation station. The project also includes consultancy services necessary to prepare project detailed design, tender documents and to assist The Gambia River Basin Development Organization (OMVG) in analyzing the offers and project supervision.

The total cost of the Project is estimated at about 631.0 million Gambian Dalasi, equivalent to about 8.8 million Kuwaiti Dinars. The Fund loan, in the amount of seven million Kuwaiti Dinars, covers about 79.2% of the project cost. OMVG provides financing for about 17.6% of the total project cost, whereas the Gambian government will cover the rest of the project cost together with any cost increase that may arise in the future.

The Loan is made for a term of 25 years, including a grace period of 5 years, and will be amortized by 40 semi-annual installments, the first of which will be due on the first date on which any interest or other charges on the loan shall fall due after the elapse of the grace period.  Loan will bear interest at 1.0% per annum in addition to a charge of 0.5% for meeting administrative costs and the expenses of implementation of the Loan Agreement.