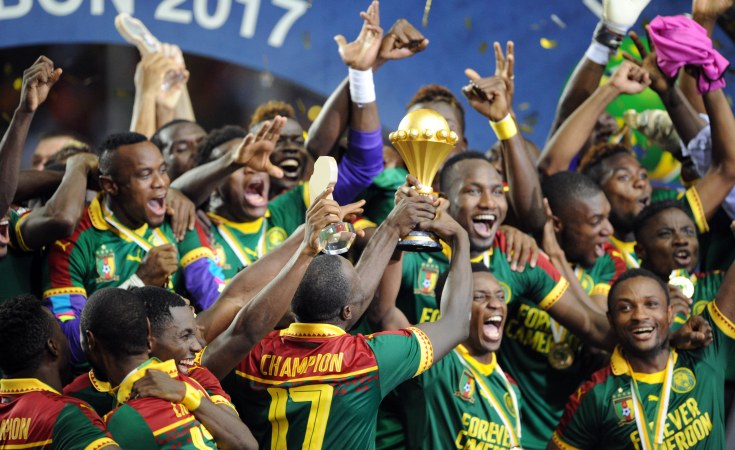 Sydney Mahlangu/BackpagePix
Cameroon celebrates winning the finals of the Africa Cup of Nations 2017 in Gabon.
allAfrica.com
By Nick Said

Hugo Broos has gone from being criticised at almost every turn to national hero in Cameroon after masterminding a most unlikely victory for the country at the 2017 African Nations Cup finals.

The Indomitable Lions, who were without eight top players that withdrew prior to the tournament, rallied from a goal down to defeat more fancied Egypt 2-1 to claim the title.

Mohamed Elneny had given Egypt a first-half lead, but Cameroon fought back in the second period as Nicolas Nkoulou and Vincent Aboubakar netted to hand them the trophy.

Broos had been fiercely criticised in the past for team selection and tactics, but had the last laugh as his side wrote their names into the history books.

He says it was team spirit more than anything else that led them to the title, perhaps a dig at those who chose not to take part in the tournament.

"There was a lot of trouble before, players who wouldn't come with us," Broos told reporters. "OK, it's their decision. But maybe they are saying now to themselves, 'Why didn't I go with them?'
"Yes [the victory] shows the character, but that I knew from the beginning. I said a few times, I do not have 23 players, I have 23 friends. It's really unbelievable ... I think this is the reason why we won.

'We came here and I think nobody thought we would go so far. We tried to get through the first round. We did it. So we said, 'OK, let's see what happens against Senegal.' We won the game again.

"Then you get a boost of confidence and from that time we believed that if we got a bit lucky we could win the final."

Broos says his team will only get better as they now look forward to hosting the tournament in two years time as defending champions.

"We still have to improve. That's proved by the first half. We were not good first half, certainly not the first 25 minutes. So this is something we have to work on.

"We thought from the beginning that Egypt would try to score very quick, but you see we can't control such situations, so there's still a lot to do."

Egypt coach Hector Cuper was gracious in defeat, despite the disappointment of another cup finals loss having finished runners-up in the five previous knockout deciders he had participated in as a club coach.

“I have to congratulate Cameroon for winning the cup. They put up a good performance and they deserved to win it,” Cuper said.

“Of course I am upset with the loss but my deepest sorrow is for the Egyptian people. I really wanted them to be happy today by winning this trophy for them because I know how much they wanted it.

“Also for the players because they have been great and have fought until the end but it was too much for them to play, physical fitness to save them for the rest of the 90 minutes.

“I don’t want to say that I am used to losing in the final but the point is I would have wanted to win it and again I say I am because the Egyptian people are disappointed. I wanted them to be happy just like I wanted this for the players as well. I am really disappointed for the people of Egypt."