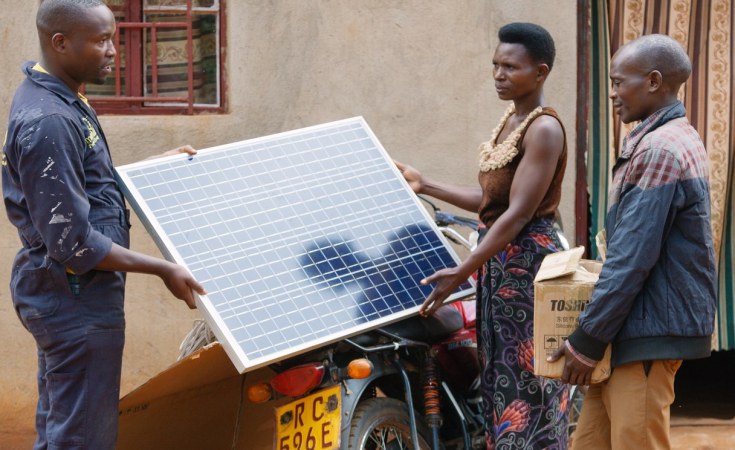 Rachel Couch/Power Africa
Two out of three people in sub-Saharan Africa live without access to electricity. Although many of these people will be connected to the electricity grid in the future, some live in remote areas that will never be connected. Power Africa's Beyond the Grid sub-Initiative, and partners like Mobisol, help bring off-grid and small-scale energy solutions to families and businesses across Africa.
allAfrica.com
blog By Aubrey Hruby

While future policy remains undecided, the opportunities in the power sector across Africa are obvious. In Nigeria, west Africa's economic engine with one of Africa's fastest growing populations, only 25 percent of some 180 million people have access to regular electricity. The country averages 32 eight-hour power outages per month, according to the U.S. Overseas Private Investment Corporation (OPIC).

This challenging reality, common in many African countries, prompted Obama to launch Power Africa in 2013 with the aim of doubling Africa's energy output by 2030. Created by executive order, the initiative aims to combine U.S. expertise in energy and investment to stimulate projects across the continent.

The U.S. commitment to boosting energy was reinforced when Congress passed the Electrify Africa Act of 2015 with broad bipartisan support to ensure continued U.S. involvement in power projects until at least 2020. But in the four years since the launch, slow progress toward the stated goal of creating 30,000 MW has led to skepticism.

The Trump Administration will have to decide how to comply with the Act either by continuing Power Africa, stripping it down in the name of foreign assistance reform, or creating a more effective, dynamic Power Africa 2.0.

If the program is reformed, a remodeled initiative could be a flagship success of Trump's Africa policy. The administration should empower Power Africa by making a commitment of at least four years, launching a pre-development fund, and investing in business intelligence services to attract more private sector partners.

Power Africa may have been hobbled with unrealistic expectations. Infrastructure projects take years to develop. Although some initial deals have been inked, from an OPIC-supported $24m solar plant in Rwanda to a $552m dual-fuel power plant in Ghana, Power Africa's early successes have largely been in unlocking the potential of existing brownfield projects stuck in limbo.

In Ethiopia, for example, Power Africa supported the country's first independent power purchase (IPP) agreement. Although Reykjavik Geothermal, the American private sector partner, had been working on geothermal projects for several years, the project was held up by the newness of IPPs in the country. With Power Africa's help, the Ethiopian government strengthened its financial modeling and geothermal regulatory structures which helped push the project towards completion..

Similarly, in Nigeria, Power Africa has assisted the government in privatizing its energy market through technical assistance. While unsticking stuck projects is a good strategy, the next wave of success will have to be built on the creation of a robust pipeline of new projects.

The lengthy project development timeline remains a challenge for investors. Getting new power projects off the ground is a complex process involving the painstaking and exhaustive promotion of an idea among government stakeholders, creation of an interested consortium with technical and financial partners, obtainment of necessary licenses and the negotiation of power purchase agreements.

Before a financial close and start of construction, governments and firms must settle on pricing, schedule of delivery, guidelines for dispute regulation, and more. Because this process can take 12 to 24 months, the pre-development phase is where most projects die.

Small, often diaspora-led, firms have spearheaded many efforts to cultivate early corporate and financial interest in power projects. They struggle to stay afloat while completing this early and critical stage. Current programs lack the financing vehicles designed to support the pre-development process.

For Power Africa to address this pipeline problem, the Trump administration should create a fund for early-stage "pre-developers." This is not charity - it is investment in overcoming constraints to getting projects online that can absorb American technology and services.

There is also a better way to leverage Power Africa's impressive private sector network including large investors like Goldman Sachs, Capricorn and Citi group. By signing up as partners, these companies have indicated interest in doing business in the power sector in African markets. But to move from intention to action they often require targeted support.

Navigating Africa as a new entrant is not easy - knowledge of financial structures and engineering is just as important as mastering the local rules of the game. To encourage more activity among private sector partners, Power Africa 2.0 should find an innovative way to provide real-time, on-the-ground data and facilitate introductions to potential local partners.

Given Power Africa's small staff and the need to be cost-effective, the initiative should engage business intelligence service providers already in the market to offer partners the necessary support in these new markets for investment to flow.

Programs like Power Africa require the best and brightest from the public and private sector, but bringing these dynamic leaders on board requires a reform of USAID's onerous procurement process. Because of the cumbersome nature of current procedures, only large, well-resourced firms filled with ex-USAID staff can write winning grants. These development industry players often do not bring the niche expertise needed for success in key sectors in African markets.

A rigorous reform of USAID's bureaucracy - which seems on the horizon under the Trump administration - will hopefully allow the leadership of Power Africa to quickly hire the right experts to help deliver better energy solutions in African countries.

When Power Africa was announced in 2013, now-President Trump tweeted "every penny of the $7bn going to Africa as per Obama will be stolen - corruption is rampant!" This off-the-cuff assertion does not reflect that most of the money put aside for the program has never moved outside of U.S. agencies.

It also does not consider the program's focus on supporting American exports. The $7 billion is not "aid as usual." It is a private sector-oriented approach that includes $5 billion in export credits from the U.S. Export-Import Bank and $1.5 billion in project finance from OPIC. The Congressional Budget Office reported that the Electrify Africa Act would save U.S. taxpayers $86 million over five years.

The Trump administration should see Power Africa's slow start as an opportunity to do something bigger and better. A reformed initiative initiativce can give U.S. energy companies and investors the confidence they need and the support they have been missing to a make a mutually-beneficial impact on the ground in African markets.

Aubrey Hruby (@AubreyHruby) is an Africa investment advisor and a Senior Fellow at the Atlantic Council. See her 2014 blog for AllAfrica: Bringing 'Power Africa' from Pledges to Projects.

Previous Story
To Power Africa's Future, a 'Wall of Money' is Ready
Next Story

To Power Africa's Future, a 'Wall of Money' is Ready