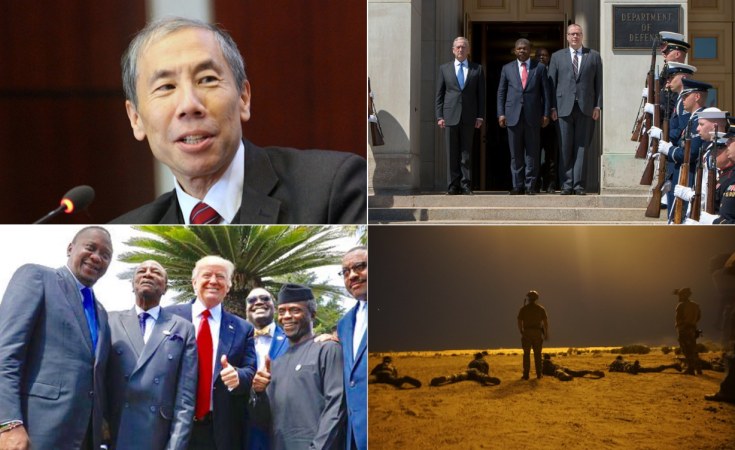 Donald Yamamoto, who has extensive diplomatic experience in Africa including two tours as a U.S. ambassador, will take office as Acting Assistant Secretary of State for Africa on 5 September. He is the second career official tapped for a senior policy position on Africa in the Trump administration.

"Having someone with Don Yamamoto's experience in that post is very important," Mel Foote, Constituency for Africa president, told AllAfrica. "As Africa confronts many challenges, we want to see responsible U.S. engagement in partnership with African governments and civil society organizations."

Yamamoto has a one-year assignment. Naming him as acting Assistant Secretary gives the administration more time to decide who to formally nominate for the position – which requires Senate confirmation – while putting the Africa bureau in knowledgeable hands. He holds the rank of Career Minister. Among his honors is the Presidential Distinguished Service Award.

"Don Yamamoto has broad knowledge and experience, both in the field and in Washington," says Ambassador Johnnie Carson, who served as assistant secretary for Africa during President Obama's first term. "He will be able to provide the leadership needed to address the range of issues that the Bureau has to address."

Since the departure of Linda Thomas-Greenfield in March, the Africa Bureau has been managed by another career foreign service officer, Peter H. Barlerin, who was nominated last month to be ambassador to Cameroon. The Bureau has five deputy assistant positions. Three are currently filled by 'acting' officers. A former ambassador to the Congo (Brazzaville), Stephanie S. Sullivan, took office in January.

A political appointee, Carol Thompson O'Connell, has responsibility for southern Africa and public diplomacy since March. O'Connell, who held a similar position in the Bureau during George Bush's second term, has been slotted into the number two position in the Bureau – principal deputy assistant secretary – known internally as the 'P-Das', in a bureau that has five deputies.

Thin ranks at State extend beyond the Africa bureau. The White House has announced nominations for only four of the 22 assistant secretary positions in the Department – one has been confirmed – and for one of the six undersecretary slots, a position one level higher than assistant secretary.

The slow pace of appointments has been exacerbated by large-scale departures. One of the latest to leave, according to Foreign Policy's Colin Lynch, is the acting director of the Bureau for International Organization Affairs, Tracey Ann Jacobson. She leaves three weeks before Trump is scheduled to address the annual opening of the United Nations General Assembly (UNGA). (Foreign Policy and Politico report a down-sizing of the U.S. delegation to UNGA this year.)

Yamamoto will inherit an "extremely young" staff, said one official familiar with the Bureau he will lead. "Africa experience will need to be developed."

Yamamoto is currently senior vice president of the National Defense University. He was U.S. ambassador to Djibouti from 2000 to 2003 and to Ethiopia from 2006 to 2009. He served as Acting Assistant Secretary previously, after Carson's 2013 departure, and was Charge d'Affaires in Somalia in 2016. He held senior posts in Afghanistan in 2014 and 2015.

The leading candidate for the Assistant Secretary post has been J. Peter Pham, an expert on African security and politics who is currently vice president and director of the Africa Center at the Atlantic Council, a leading Washington, DC think-tank. But he ran into Congressional opposition.

Morocco has occupied the territory since seizing the former Spanish colony in 1975, after Spain withdrew in the face of a Saharan independence campaign, led by the Polisario movement. Morocco continues to claim sovereignty over the phosphate-rich SADR and occupies large portions of it, while stalling a self-determination referendum mandated by the United Nations and backed by most African countries.

Morocco quit the Organization of African Unity (OAU) in 1984, when that pan-African body accepted Western Sahara as a member. This year, in a move welcomed by SADR leaders as a potential path to a peaceful agreement, Morocco joined the OAU's successor, the African Union.

In February, Senator Inhofe led a delegation to the Shaheed El-Hafed refugee camps, administered by Polisario, and met with SADR President Brahim Ghali. Inhofe "wants to see the administration take a tougher stance on the status of the disputed territory…", Foreign Policy reported last week.

Pham remains at Atlantic Council, but acquaintances say he been providing policy advice to the administration and could end up with a State Department position that does not require Senate confirmation.

Inhofe is said by sources to have suggested Jack Kingston for the Assistant Secretary job. Kingston, a former Republican member of the U.S. House of Representatives from Georgia, makes regular appearances on CNN and frequently posts on Twitter defending President Trump.

Although he has no public record of engagement with Africa issues, Kingston lived in Ethiopia as a child, while his father served as an advisor to the Ministry of Education in Addis Ababa. After an unsuccessful campaign for Senate, Kingston joined the DC law firm Squire Patton Boggs and registered as a lobbyist, which could make confirmation for an administration job more difficult.

"Analysts are left to speculate about how much personnel appointments might actually shape Africa decisions on the ground," William Minter wrote in the introduction to his Africa Focus feature on No Policy? Bad Policy? or Both?

The Trump administration's Africa actions so far have focused mostly on security and military matters. Kenya won approval to purchase weaponized helicopters. A $600 million sale of high-technology attack planes and equipment to Nigeria has moved ahead, after a delay during the Obama administration based on human right concerns.

In March, the President approved revised combat rules for U.S. forces fighting in Somalia against Al Shabaab, the Al Queada-affiliated militant group. These included reduced protections for civilians and greater control over military operations by U.S. military personnel. In April, several dozen U.S. troops were deployed to train and equip Somali soldiers and those from the African Union Mission in Somalia (Amison).

A few African officials have had high-level contacts with the administration. In May, Trump had a brief encounter with African leaders participating in the G20 summit in Italy, including Ethiopia's Prime Minister Hailemariam Desalegn, Nigeria's then-acting President Yemi Osinbajo, Presidents Uhuru Kenyatta of Kenya and Mahamadou Issoufou of Niger, and African Development Bank President Akinwomi Adesina.

Also in May, Angola's Defense Minister João Lourenço paid an official visit to Defense Secretary James Mattis at the Pentagon, where the two signed a Memorandum of Understanding, which Matthis termed "the first steps toward a strategic partnership". In a Council on Foreign Relations blog, Rachel Sullivan wrote that with Lourenço's election as president this month, "it will be interesting to see just how the Trump administration plans to develop this strategic partnership."

In remarks after meeting government officials, Green expressed the hope that "the extended sanctions review period will provide an opportunity for further progress" and urged "positive actions by Sudanese authorities. These include, he said, "maintaining a cessation of hostilities in the conflict areas, continuing improvement of humanitarian access throughout Sudan, and maintaining cooperation with the United States on both regional conflicts and regional counter-terrorism threats."

The administration set October 12 as the revised deadline for deciding "whether to end sanctions against Sudan put in place initially over its support for international terrorism and then for the violence it used suppressing rebel groups in the five states that make up the Darfur region," Carol Morello reported this week in the Washington Post.

At the same time, however, the State Department post established to provide coordination on the issue, the Special Envoy for Sudan and South Sudan, is one of some 70 similar positions listed for elimination by Tillerson is a letter to Congress this week.

As important as decisions about Africa are, Minter argues that "fallout effects" from global policy choices may have even more far-reaching consequences for Africa. Among these, he says, are climate change, counter-terrorism, health, corruption, illicit financial flows, human rights and economic and social development goals.

Previous Story
Next Story
Does Trump's Administration Have an Africa Policy?