Zimbabwe: What Led to Situation in Zimbabwe? 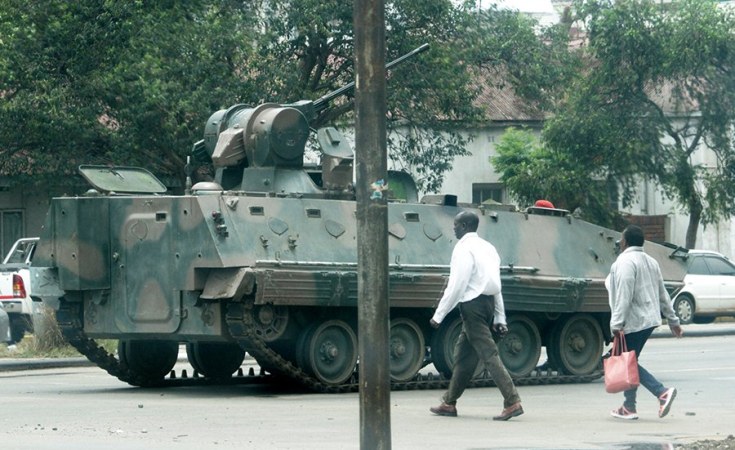 The Herald
The army, maintaining a presence in Harare, are calling for peace and calm.
allAfrica.com
By Jerry Chifamba

Cape Town — Here are the most recent events leading to the tense political situation in Zimbabwe:

Mnangagwa was appointed vice president in 2014, taking over from Joice Mujuru - who was axed after Grace Mugabe launched a campaign accusing her of plotting to topple the president.

Grace Mugabe accuses Mnangagwa of leading the so-called Lacoste faction in the party, which consists of older party members loyal to Mnangagwa. She attacks Mnangagwa in front of thousands of party supporters at the Presidential Youth Interface rallies, and challenged the deputy president to rein in his supporters whom she accused of insulting the presidency in their quest to succeed her husband.

Vice president Emmerson Mnangagwa is rushed to hospital by helicopter after being taken ill while attending President Robert Mugabe's rally in Gwanda. First Lady Grace Mugabe told a rally that both she and the president had been having sleepless nights because of accusations that it was ice cream from her dairy business that had been laced with poison.

Mugabe and his wife Grace launch a scathing attack on Mnangagwa, accusing him of fanning factionalism within the ruling Zanu-PF party. 'Angry' Grace says she wants Mugabe's VP Mnangagwa 'gone before extraordinary congress' in December.

Mugabe exercises his powers to relieve Emmerson Mnangagwa of his position as vice president, accusing him of "disloyalty" and plotting to oust the 93-year-old ruler.

A faction of war veterans, whose leaders have also been ousted from Zanu-PF, say that a military coup "cannot be ruled out" in the country following the sacking of former VP Emmerson Mnangagwa.

Mnangagwa has been spirited to a safe place where "assassins can longer reach him". This is according to the Zimbabwe Liberation War Veterans' Association leader‚ Chris Mutsvangwa‚ who was speaking at a media briefing in Sandton.

In a statement, former Vice President Emmerson Mnangagwa has revealed that he has fled the country after receiving death threats. He vows to return one day and lead the country.

A flurry of party endorsements and parades in honour of Grace Mugabe, Zimbabwe's first lady, could mark the stirrings of a national political dynasty for the Mugabes, as structures within the ruling Zanu PF endorse Grace as a potential candidate for the vice presidency following Monday's dismissal of former Vice President Emmerson Mnangagwa.

Zimbabwe Defence Forces commander Constantine Chiwenga issued a written statement, days after Mugabe fired Vice- President Emmerson Mnangagwa, who was widely backed by the army and was once viewed as a potential successor to the president.

A statement issued by Mugabe's Zanu-PF youth league in response to General Constantine Chiwenga. The youth league of Zimbabwe's ruling Zanu PF party has denounced the threats of the army against the party saying its interference is illegal.

A day after issuing a stern warning to President Robert Mugabe and the ruling Zanu-PF‚ Zimbabwean military forces have taken part in a training routine‚ sparking panic in the country's capital.
After seizing state TV, an army spokesman announced it was targeting people close to Mugabe who had caused "social and economic suffering". He says Mugabe, in power since 1980, is safe.