EU Bank Extends EUR 100m Credit to Afreximbank, on the Margins of AU-EU Summit in Abidjan 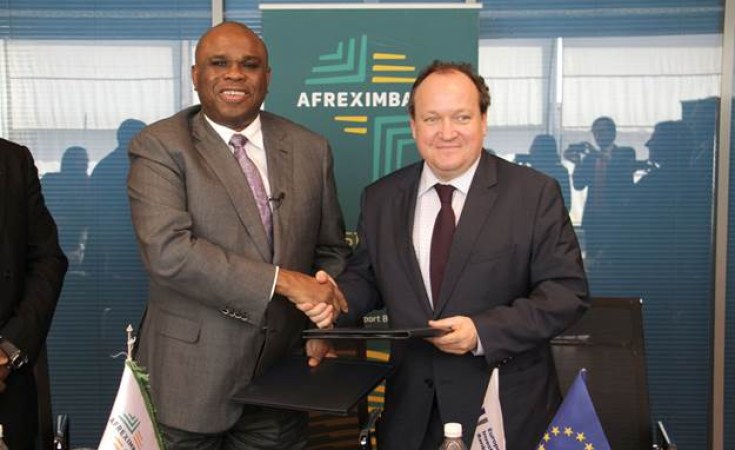 Abidjan — The African Export-Import Bank (Afreximbank) and the European Investment Bank (EIB) today in Abidjan, on the margins of the African Union-European Union Summit, entered into a line of credit agreement amounting to EUR 100 million, granted by EIB to Afreximbank. This facility is aimed at financing trade-related long-term productive investments by private sector entities or commercially operated public sector entities in Afreximbank member countries that are also signatories of the Cotonou Agreement.

The seven-year loan will finance trade-related investments and projects in Africa, with particular emphasis on small and medium-sized enterprises (SMEs) engaged in export manufacturing. It is expected to enhance intra-African trade, Africa's value-added exports, as well as trade with the European Union, thereby strengthening trade as a key driver of economic growth and competitiveness.

The facility agreement will add strong impetus to our drive for expanded intra-African trade and for the promotion of industrialisation and export manufacturing across Africa," said Dr Benedict Oramah, President of Afreximbank. "We are delighted that the European Investment Bank has chosen to partner with us in the pursuit of Africa's trade development and we are confident that, with the facility, we can look forward to mutually beneficial development outcomes for our two institutions and to the further strengthening of the relationship between Africa and Europe.

Dr. Oramah said that the purpose of the facility was fully aligned with Afreximbank's current strategy which prioritised intra-African trade, intra–African investments and export manufacturing, expressing the view that it would contribute to employment creation, increased economic activities, and increase in tax revenues for fiscally constrained governments, amongst other outcomes.

Afreximbank was aggressively pushing the goal of facilitating the de-commoditisation of Africa as a critical factor in dealing with the migration challenges arising from the ever-expanding youth bulge in the continent, he said.

Speaking during the signing ceremony, Ambroise Fayolle, EIB Vice-President responsible for Development, said: "The European Investment Bank's first ever transaction with Afreximbank is welcome news in the framework of the AU-EU Summit in Abidjan. Both the EIB – as the Bank of the European Union, delivering on its objectives – and our African partners share the strategic objective of supporting the private sector with a particular focus on trade and trade-related infrastructure. This agreement will help develop EU-African trade relations and, crucially, provide much-needed jobs across the continent."

The African Export-Import Bank (Afreximbank) is the foremost pan-African multilateral financial institution devoted to financing and promoting intra- and extra-African trade. The Bank was established in October 1993 by African governments, African private and institutional investors, and non-African investors. Its two basic constitutive documents are the Establishment Agreement, which gives it the status of an international organization, and the Charter, which governs its corporate structure and operations. Since 1994, it has approved more than $51 billion in credit facilities for African businesses, including about $10.3 billion in 2016. Afreximbank had total assets of $11.7 billion as at 31 December 2016 and is rated BBB+ (GCR), Baa1 (Moody's), and BBB- (Fitch). The Bank is headquartered in Cairo. For more information, visit: www.afreximbank.com

Tagged:
Copyright © 2017 African Export-Import Bank. All rights reserved. Distributed by AllAfrica Global Media (allAfrica.com). To contact the copyright holder directly for corrections — or for permission to republish or make other authorized use of this material, click here.