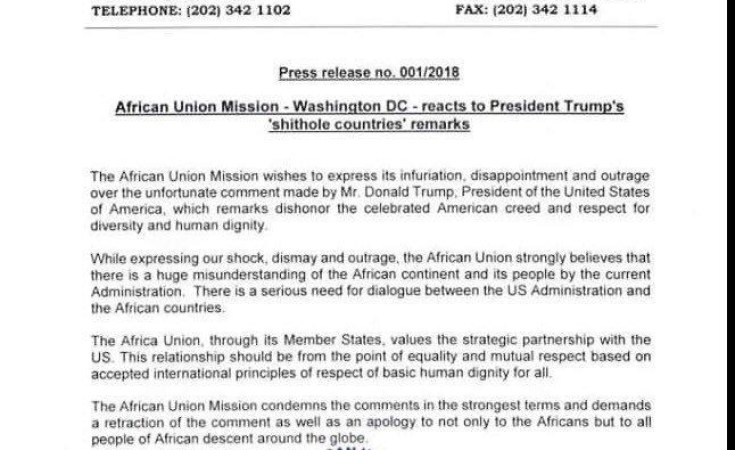 U.S. President Donald Trump has done it again, calling African nations "shithole countries". Trump said this on Thursday as he was rejecting a bipartisan immigration deal, according to Associated Press. He questioned why people from countries like Norway shouldn't be given entry instead of people from "shithole countries" in Africa and Haiti.

This is not the first time Donald Trump has offended Africans and Haitians. In December he was reported to have said that 40,000 Nigerian nationals alongside Haitians had come to the U.S. and were to blame for spreading HIV/AIDS in the country.

After all the backlash he received for calling Namibia "Nambia" during his meeting with African leaders at the 72nd Session of the United Nations General Assembly in September, one would think he would have known not to mess with Africans.

During the UN General Assembly he also had to be schooled about global warming from South African President Jacob Zuma. He has over the years in his tweets denied that it exists, going as far as calling it an "expensive hoax".  Ever the diplomat, he went on to gush over how many of his friends have made big money from business deals on the African continent.

South Africa's ruling party, the African National Congress, has expressed its disappointment in Trump's comment on African immigrants, calling it "extremely offensive", while Botswana has publicly summoned the U.S. ambassador in Botswana to "please explain".

The Botswana government has previously lambasted the U.S.'s bullying tactics ahead of a UN Security Council vote on Trump's decision to recognise Jerusalem as the capital of Israel.