Africa: A Tale of Two Elections - Mali and Zimbabwe at the Crossroads 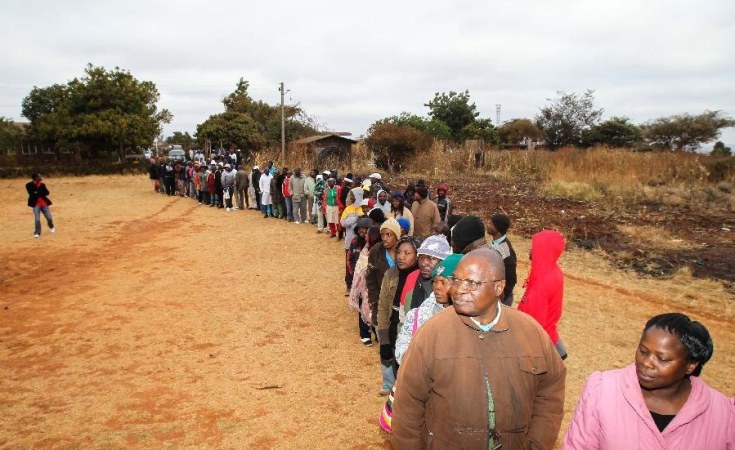 By the whims of the calendar, back-to-back elections in Mali (July 29) and Zimbabwe (July 30) potentially could change the political landscapes in the Sahel and Southern Africa.

In 2013, Mali astounded the international community by organizing a successful presidential election in just two months in the aftermath of a bloody civil war only staunched by a French military intervention. But the free, fair and peaceful election was marred by the inability to conduct the poll in the northern third of the country because of rebel and jihadist violence prolonging the last vestiges of the civil war started in 2012 by Tuareg rebels.

Voting in the midst daily violence in the north

Five years and a peace treaty later, there is still uncertainty as to whether northerners in Kidal, Timbuktu and Gao will be disenfranchised once again. Despite the 2015 peace treaty, disarmament, demobilization and reintegration efforts, and the presence of 15,425 UN peacekeepers in MINUSMA--the most deadly peacekeeping mission in the world--violence is rising daily in the north.

Nevertheless, 24 candidates are vying for the presidency with President Ibrahim Boubacar Kéïta and former finance minister Soumaïla Cissé campaigning as the frontrunners. In a similar match-up in 2013, Keita won in a second round with a landslide 77 percent of the vote. A Keita victory is widely expected in the upcoming election as well.

Selfies during the 'military assisted transition'

On the other side of the continent, Zimbabweans will go to the polls in a harmonized election to choose a president and both houses of the legislature. When former president, Robert Mugabe, was ousted in a "militarily assisted transition" (MAT)-- an innovative term for a coup--in November 2017, Zimbabweans were careful to architect a constitutionally defensible resignation negotiated over a three-day period with a golden parachute of a $10 million retirement package for their retiring leader.

Most significant, when Mugabe stepped down the military was transformed from dreaded security force loyal to an individual rather than the state, to an institutional defender of the constitution and champion of the people. In a celebratory exhibition of the November 11 MAT at the Bulawayo Museum, photos show soldiers lounging on tanks outside of the Presidency and joyful citizens taking selfies with smiling soldiers in the background.

Current President Emmerson Mnanagwa, a longtime Mugabe ally until a falling-out between the two men forced him to flee to South Africa, is running for a full term as the standard bearer of the ZANU-PF ruling party.

A longstanding power-broker, Mnanagwa has held some of the most important portfolios in the country, serving as Minister of Justice, Minister of Rural Lands and Speaker of Parliament. His long service is tarnished by his close association with Mugabe, and especially tainted by the fact that he was the first Minister of State Security and directly implicated in the 1983-1984 Matabeleland massacre of 20,000 Ndebele people.

Mnanagwa has all of the advantages of incumbency, plus a seasoned party apparatus and a full campaign war chest. Huge billboards are visible in every city with messages of Mnanagwa's greatness and nearness to God: "A life of service and sacrifice," also inferring "The voice of the people is the voice of God," while opposition Movement for Democratic Change candidate Nelson Chamisa's face is relegated to street lights and lamp posts in 12-by-12 photos. ZANU-PF has gifted traditional leaders and local chiefs with new Land Rovers in every province: Local chiefs traditionally tell their people how to vote.

It's a hard road for the opposition which is underfunded and only recently united, but it might capitalize on two possible advantages: the economy and youth. The economy is in tatters. The middle class has been decimated as FDI dried up and local businesses failed. Former senior civil servants Have been reduced to buying and selling chickens. Tourism, one of the key anchors of the economy, is so moribund that only one tour company is left in business. A coherent economic plan might attract serious debate.

The opposition might also play the youth card. Young voters I recently met with want change. They seemed to relate to 40-year-old MDC candidate Chamisa. The young, educated population with 83 percent literacy and 90 percent unemployment may be ready to listen carefully to a new generation whose slogan is "Real Change that Delivers."

In the past two weeks in major cities of Bulawayo, Matare, Mavshingo, Victoria Falls and Harare crowds of young men were lounging on the streets or waiting patiently in line at banks to withdraw the $20 US per person limit. At the same time, hoards of young people were crowded outside MDP headquarters in Mutare and Harare, not surprising in urban strongholds but maybe indicative of a trend.

Then again, a few blocks later, similar crowds milled around ZANU-PF headquarters. The question is: Will money, organization and a rural stronghold outweigh a youthful urban population hungry for change?

The political climate is changing as the election grows closer. Afrobarometer reports a gradual increase in willingness to discuss politics more openly. The changed climate is confirmed by the muted response to the recent Bulawayo attempted assassination of Mnanagwa.

No state of emergency was declared and life in Bulawayo continued as normal. In another sign of opening political space, the military publically pledged to support the election's winner. Electoral violence, with the horrific exception of the Bulawayo bombing, is greatly reduced, although the UN High Commissioner for Human Rights (OHCHR) reports increasing violence as the election nears.

Engaged youth could make earthshaking difference in both elections

At the end of the day in the back-to-back elections, Mali's election will be a mandate for continuity. Neither candidate will unveil a bold program to attack corruption or offer a new approach to tackling the open sore of unresolved northern grievances. If President Keita wins a second term, he may interpret the victory as a mandate to open political space and address northern grievances more forcefully. He will certainly work to repair his international image and forge a more positive legacy.

If Cisse were to win, although his platform centers on his pledge to fight corruption, his would be a transactional rather than a transformative presidency, continuing traditional alliances, especially the G-5, the security coalition of Burkina Faso, Chad, Mali, Mauritania and Niger formed to combat ISIS, Al Qaeda and Boku Haram in the Sahel.

If Mnanagwa is victorious, the second opportunity for a regional shake-up will be muted as Zimbabwe continues with moderate changes in decentralization and economic reforms and measured reduction in corruption to encourage foreign investment. A Nelson Chamisa win will reverberate across southern Africa, signaling that a new generation is demanding to be heard.

The military worked with the other foundational institutions of the nation, supporting the rule of law rather than the rule of one Big Man. Electoral violence has been reduced under the watchful eye of the international community. Women were acknowledged as candidates and enshrined and protected in the electoral laws.

Finally, in the back-to-back elections the real earthshaking change may be that in both countries young people are participating, with new faith in their institutions, expressing a willingness to re-group if their candidate loses, and to work for change within a constitutional framework and judicial system.

The importance of the back-to-back events isn't the elections per se, but the enthusiastic participation and engagement of citizens in a political give-and-take that strengthens the muscles of the democratic process and is perceived by all as free and fair from Bamako to Harare.

Previous Story
Why First Elections After Mugabe's Fall from Power Are So Significant
Next Story
Is Electoral Commission Ready for Polls?

Why First Elections After Mugabe's Fall from Power Are So Significant

Is Electoral Commission Ready for Polls?

Next Story
Tagged:
Copyright © 2018 The Bridges Institute. All rights reserved. Distributed by AllAfrica Global Media (allAfrica.com). To contact the copyright holder directly for corrections — or for permission to republish or make other authorized use of this material, click here.