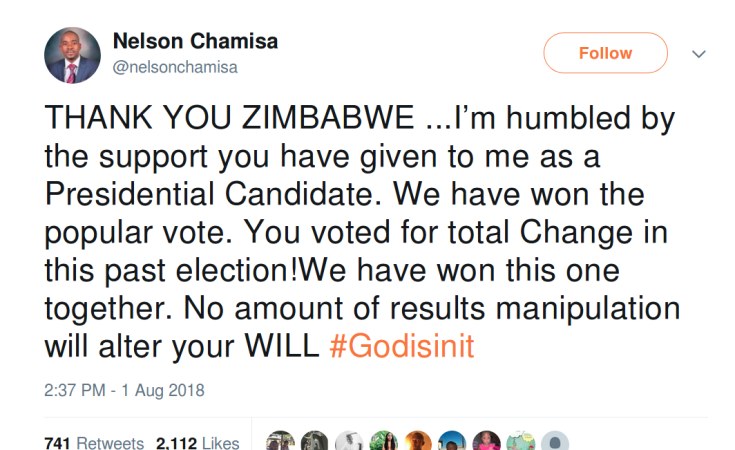 MDC Alliance presidential candidate Nelson Chamisa has thanked Zimbabweans for their support in an announcement that says "we have won the popular vote".

His tweet, sent out just minutes ago, says he is "humbled by the support you have given to me as a Presidential Candidate."

Chamisa made the comments as the Zimbabwe Electoral Commission delayed the release of presidential election results, which they had said would be out by this afternoon.

Chamisa went on to say "No amount of results manipulation will alter your WILL" in his tweet, alluding to the delay being a ploy by the ZEC to steal the vote for the ruling Zanu-PF, which has already been announced as having won the majority in Parliament.

President Emmerson Mnangagwa, in the wake of protests sparked by the delay in the release of presidential elections and the announcement that the Zanu-PF have won a majority in Parliament, has called on Zimbabweans to "desist from provocative declarations and statements" at this "crucial time".

"We must all demonstrate patience and maturity, and act in a way that puts our people and their safety first. Now is the time for responsibility and above all, peace," Mnangagwa said via his official Twitter account.

An AFP photographer has confirmed the death of a man who was shot in Harare during protests over alleged election fraud.

Zizi Kodwa of South Africa's ruling African National Congress slammed Chamisa's claims of an electoral victory, tweeting: Nelson Chamisa of MDC must be held accountable for inflammatory and reckless statements which has now led to eruption of violent protests in Harare. What started as peaceful elections in Zimbabwe history. He irresponsible declared himself a "winner". #ZimDecides2018

Deadly Protests Follow Elections in Zimbabwe
Tagged:
Copyright © 2018 allAfrica.com. All rights reserved. Distributed by AllAfrica Global Media (allAfrica.com). To contact the copyright holder directly for corrections — or for permission to republish or make other authorized use of this material, click here.