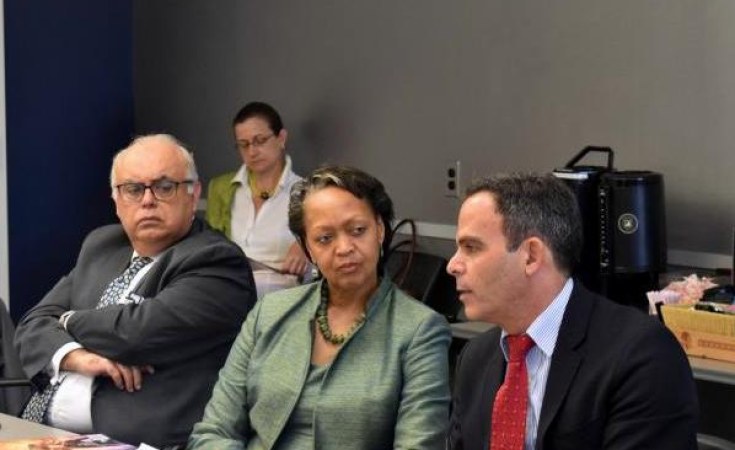 On Tuesday, July 31, 2018, Corporate Council on Africa in collaboration with Good Governance Africa held a working group meeting on 'Economic and Governance Indicators Across the Continent.' GGA is a research and advocacy non-profit organization with centers across Africa focused solely on improving governance across the continent. GGA engages in applied research, and their work is focused on advancing the key governance principles of democracy, accountability and transparency.

CCA President and CEO, Florie Liser, stated that having followed the recent political activities on the continent, (elections in Zimbabwe/Mali), there is a general “Afro-Optimism” across African countries. “We know how important good governance is to the economic future of Africa. That’s what investors look for.”

Dr. Alain Tschudin highlighted GGA's locations in Africa: an office in Harare, Zimbabwe, a regional office in Accra, Ghana that covers West Africa, and a country office solely dedicated to Nigeria.  They hope to open an East African office (African Union office), expect to open an office in Abidjan, Côte d’Ivoire, to focus on Francophone West Africa, and are opening an office in the Sahel region, as well a one dedicated to the Congo.  Dr. Tschudin runs the Southern African Development Community (SADC) GGA center that covers 16 Southern African countries.

He remarked, “We are trying to make positive change in the governance space. We like to promote a more fact-based reality.”  GGA achieves this goal primarily through the publication of two journals: Africa in Fact and Annual Africa Survey, with the current issue comprising of three thousand indicators in the survey.

He mentioned that they would be launching their online dashboard, with ten thousand socio-political and economic indicators on the continent. This resource would be launched in September 2018 during UNGA week.

He noted, “If the saying that ‘knowledge is power’ is true, then this definitely is a step in the right direction.”  GGA’s goal is to show what it looks like when Africa brings data to life.

A brief documentary on GGA's work on the continent was presented. Dr. Alain mentioned that the motivation behind the Africa in Fact journal is to equip people with knowledge to play a role in their own realities, noting that GGA believes in addressing urban challenges holistically. “It’s about how governments interact with people.  It’s about social cohesion. The problems are very rarely about what we’ve built but how we inhabit what we’ve built.”