Africa: Fridays With Fatima - What Can the Media Do to Promote Peacebuilding?

VIDEO: Fridays With Fatima - How The Media Can Promote Peacebuilding
allAfrica.com
interview

Fatima Madaki, introduced in the first episode of Fridays with Fatima, works with Search for Common Ground Nigeria, which focuses on peacebuilding in Nigeria's communities, where citizens deal with Boko Haram attacks, Biafra separatists, and violence involving Fulani herders and farmers in several states.

Now she talks about what the role of the media is in telling the stories that promote peacebuilding...

Media is a very important tool that can be used to tell stories differently. Um, enough of the bad news. Um, the news is always about violent extremism, farmer-herder conflict and you know, pushing that lens of religion.

Let's tell the good stories of people that are working to change that. Like I mentioned earlier, if we're working to form like common ethical values, the media should play a key role in, in doing that by changing the narratives.

Um, because I, I think that if what media is pushing is talking about the positivity of people's lives, it would encourage people to want to do more either for the need for recognition, the sense of belonging, you know, that you're, part of a good cause rather than the stories of, of destruction. I'm not saying that we shouldn't say those stories.

It's good because then you know, we get to know what's happening and it forms part of our early warning mechanism. But how about those untold stories of women, men and children that are doing tremendous jobs out there. We need to tell that more and the stories need to move beyond the superficial to more richer and in-depth, um, dynamics to the conflict.

For instance, how young people are beginning to take up photography, for instance, sharing the culture of their people, the lifestyle, telling, telling the story of resilience.

You know, beautiful things like that should be told. 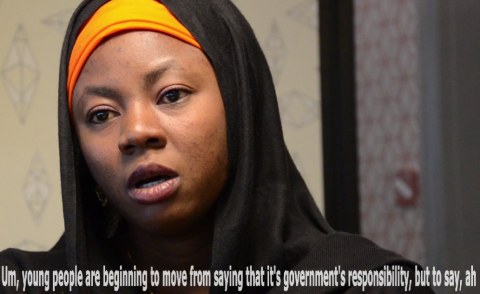 Fridays With Fatima - How to Move Towards a More Peaceful Nigeria
Tagged:
Copyright © 2019 allAfrica.com. All rights reserved. Distributed by AllAfrica Global Media (allAfrica.com). To contact the copyright holder directly for corrections — or for permission to republish or make other authorized use of this material, click here.