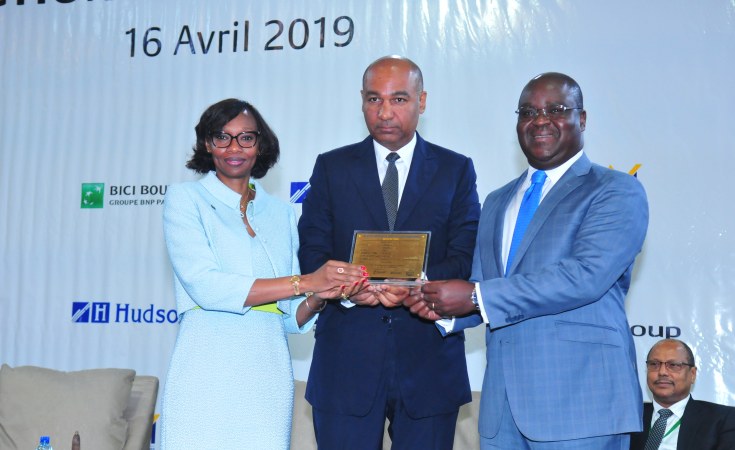 Lomé (Togo), April 16, 2019 - In the presence of the Minister of Economy and Finance of the Togolese Republic, Mr. Sani Yaya, representing His Excellency the President of the Republic, Mr. Faure Essozimna Gnassingbé, the pan-African banking group Oragroup was listed today on the Bourse Régionale des Valeurs Mobilières (BRVM), during the listing ceremony held in Lomé. This listing - the most important since the creation of the BRVM in 1998 - follows the success of its 100% subscribed public offering of shares, from 29 October to 22 November 2018.

This public offering included the issuance of 6,097,561 new shares, through a capital increase, and the sale of 7,785,445 existing shares on the secondary market at a price of CFAF 4,100 per share, representing a CFAF 56.92 billion (€86 million) fundraising on the regional financial market. At present, 20% of Oragroup's capital is listed on the stock exchange (floating capital). 20% of Oragroup's share capital are now listed on the stock exchange (floating capital). The Group's other current shareholders retain 80% of the capital, including pan-African investor Emerging Capital Partners (ECP), which will remain the reference shareholder with more than 50% of the shares.

"ECP and Oragroup today demonstrate that African finance is developing, that it exists to fund our economies and that we are witnessing the emergence of an authentic Afrocapitalism, capable of intensifying and accelerating the continent's growth, and its profound and sustainable transformation for the wider benefit of the populations. ECP's strategy is to create value in each of its investments by bringing all of the company's activities up to international standards to support the emergence of regional champions over time," explains Vincent Le Guennou, Chairman of the Board of Directors of Oragroup and Co-CEO of Emerging Capital Partners.

"This initial public offering stems from the work carried out over the past 10 years but also and above all is an incentive to continue along the same path. The market's confidence confirms the strength of our model and the growth potential of our Group. Oragroup intends to use this new flexibility to invest in the expansion of its network and customer services, mainly to the benefit of individuals and SMEs. This capital increase will specifically enable investments in digital banking, allow us to seize growth opportunities in Central African countries, increase the Group's reputation with the financial community and the general public, and strengthen the equity capital of some subsidiaries," says Binta Touré Ndoye, CEO of Oragroup.

In 10 years, Oragroup's growth trajectory has been exemplary. The Orabank network has grown from having a presence in five countries in West and Central Africa to a pan-African dimension with subsidiaries in 12 countries, spread across four currency areas. After winning the "best regional bank in West Africa" award in 2015 and 2017 (African Banker Awards), in May 2018, Oragroup obtained the Bloomfield agency's A long-term investment and A2 short-term investment ratings, thus showcasing the strength and performance of the Group. On November 30, 2018, three Oragroup subsidiaries in Burkina Faso, Senegal and Togo won the "Bank of the Year Award" in their respective countries from The Banker magazine, published by the Financial Times Group.

Working towards financial inclusion through the deployment of innovative solutions, Oragroup is also focusing on the less banked segments of the population. This commitment is reflected in its CSR approach, which is an integral part of its strategy and is a priority of its governing bodies, focused on anti money laundering, energy transition, the management of social and environmental risks, and the well-being of the general public and its employees.