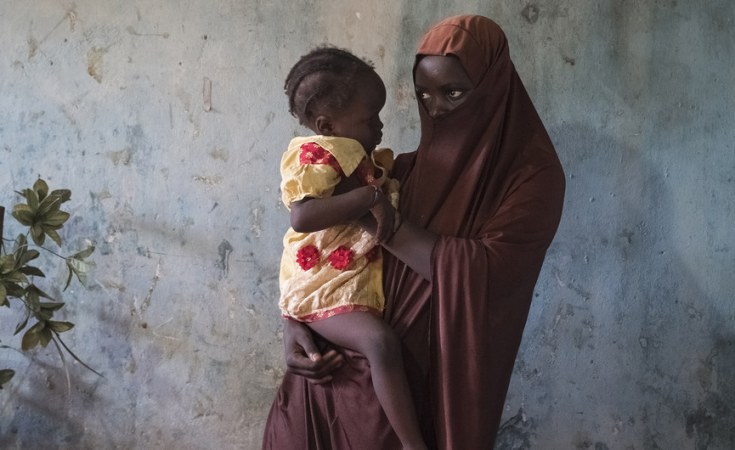 Vlad Sokhin/UNICEF
Dada, 15, was abducted by Boko Haram and became pregnant with her daughter after she was raped while in captivity.
allAfrica.com

Cape Town — How the Nigerian government treats the many women formerly associated with Boko Haram who have now returned to areas controlled by Abuja could play a role in ending the group's insurgency, says a new report.

The report, published on Tuesday by the International Crisis Group (ICG), says that while many women and girls were captured in raids or coerced into Boko Haram during the insurgency, others joined voluntarily, some encouraged by their families or following male relatives in actions reflecting government neglect and patriarchal attitudes in north-eastern Nigeria.

"Many women, including girls as young as twelve, were forced into marriage, sometimes under threat of death, and subsequently subjected to marital rape. But for many others, and even to some of the former, Boko Haram also offered a decent standard of living relative to that they had previously experienced."

The report says tens of thousands of women have returned to Nigerian government control since 2015 after fleeing Boko Haram or being captured or rescued by the army.

It adds: "The... women who have left the insurgency and are now in Maiduguri and garrison towns all over Borno state could have a role to play in helping end the rebellion... Managing their return well could show their insurgent husbands and brothers, some of whom reports suggest are exhausted by fighting and ready to put down their arms, that both the state and their fellow citizens will tolerate the militants' return to civilian life."

The 35-page report is based on field research carried out in Abuja and in Maiduguri, capital of Borno state, in March, October and December of last year. The ICG is an independent, Brussels-based research NGO which works to prevent and resolve conflict.

The research showed that although women who returned were initially stigmatised by surrounding communities – to the degree that on occasion they even killed their own babies fathered by jihadists – the stigma has now been replaced by a "grudging tolerance".

Nevertheless many still feel ostracised and a number report abuse – "insults, threats, thefts and various forms of sexual violence" – at the hands of security forces, some to the degree that they return to Boko Haram.

"Since the insurgency emerged in response to concerns about recognition, respect and justice, the treatment of female returnees is a benchmark for insurgents and many others in the north east," the report says.

"The notion of women as Boko Haram's archetypal victims ignores a long history of women's suffering in the north east and obscures the ways in which women's aspirations have fed, but also could help resolve, the conflict.... [B]y helping women who have left Boko Haram return to civilian life in safety and dignity, the authorities can lower risks that those women return to the insurgents' ranks and potentially encourage further demobilisation, including among male militants.

"Increasing support for people displaced by the conflict and more generally for the north-east's development can help repair the frayed relations between state and society in north-eastern Nigeria that have fuelled the insurgency."

The report concludes: "Genuine reintegration and resettlement may well remain elusive while violence rages, but returnees and other citizens should be encouraged to tolerate one other in preparation for the day when the fighting stops and the real work of rebuilding Nigeria's north east can begin."

Our Girls Need You!

Dapchi Girls Abduction a Grim Reminder of Chibok
Tagged:
Copyright © 2019 allAfrica.com. All rights reserved. Distributed by AllAfrica Global Media (allAfrica.com). To contact the copyright holder directly for corrections — or for permission to republish or make other authorized use of this material, click here.