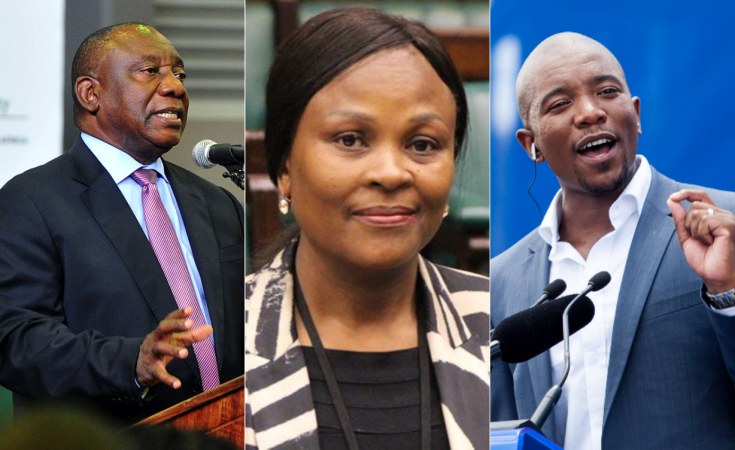 Cape Town — Public Protector Busisiwe Mkhwebane has confirmed in a letter to Democratic Alliance leader Mmusi Maimane that President Cyril Ramaphosa is implicated in her investigation into the R500,000 donation he received from Bosasa chief Gavin Watson, Business Day reports.

Maimane, who requested that Mkhwebane investigate whether Ramaphosa lied to Parliament about the donation, received confirmation in the Public Protector's message that Ramaphosa was served a with a section 7(9) notice on May 30. A section 7(9) notifies a person they are implicated in an investigation by the public protector and allows them 10 days to respond to findings made against them.

Mkhwebane added in her letter to Maimane that Ramaphosa had until June 21 to respond to her Bosasa report, despite the President requesting an extension to June 28. Ramaphosa also requested to cross-examine several people Mkhwebane interviewed for her report, including Maimane.

According to News24, the Democratic Alliance's complaint against Ramaphosa arose after he initially told the National Assembly that his son Andile had received money from Bosasa for services rendered in terms of a consultancy contract. The Presidency later corrected that reply in a letter to National Assembly Speaker Baleka Mbete. The president said the R500 000 payment in question was actually a donation that had been made to his ANC presidential campaign, of which he had previously been unaware.

Bosasa has received billions of rands in government contracts over the past decade and has been implicated in alleged corruption during the Zondo Commission of Inquiry into state capture.

Ramaphosa, the Public Protector and That R500,000 Donation
Tagged:
Copyright © 2019 allAfrica.com. All rights reserved. Distributed by AllAfrica Global Media (allAfrica.com). To contact the copyright holder directly for corrections — or for permission to republish or make other authorized use of this material, click here.