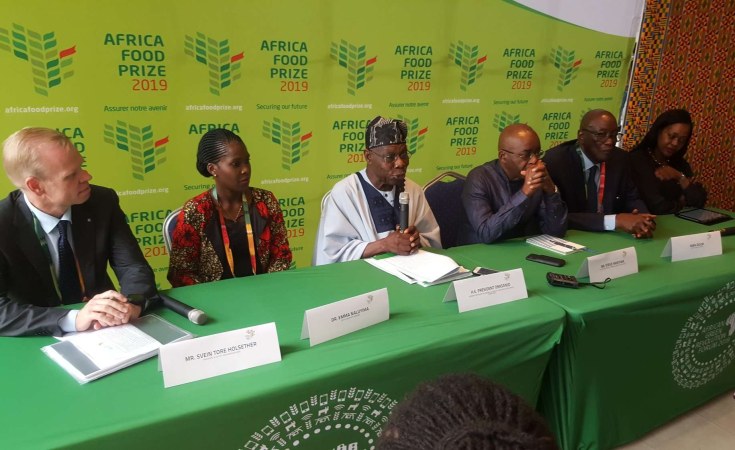 Accra — Uganda's Dr. Emma Naluyima and Senegal's Baba Dioum have been honoured with the prestigious 2019 Africa Food Prize for their commendable effort in demonstrating and promoting innovative and sustainable growth in Africa's agriculture through improved resource use and market links.

Agricultural policy advocate Baba Dioum has served as the Coordinator General of the Conference of Ministers of Agriculture in West and Central Africa, a 22-country group convened to encourage high-level dialogue and review of food and agricultural policies. He is a policy champion and agricultural entrepreneur from Senegal. Dioum has massively contributed to the acceptance and implementation of the Comprehensive Africa Agriculture Development Programme across West and Central Africa.

Dr. Emma Naluyima is a smallholder farmer and veterinarian in Uganda. She used to be work for the government before she quit to start farming. She has integrated crop growing and livestock raising on her her one-acre plot to build a successful, profitable and environmentally friendly farm. Naluyima recycles farm resources to provide natural fertilizers and pesticides as well as biogas. She also trains other farmers in Uganda.

The award recognizes individuals and institutions whose outstanding contributions to agriculture and whose breakthrough achievements alleviate hunger and promote food security for Africans.

The winner has been selected by the Africa Food Prize Committee that is chaired by the former Nigerian president Olusegun Obasanjo.

Obasanjo congratulated the winners, praising them for their courage in defying the status quo to open new pathways toward more prosperous agriculture, and for their solidarity with many others who wish to follow in their footsteps. "What most strikes me about this year´s winners is how their academic and professional success has gone hand in hand with their success as farmers," said Obasanjo. "Rather than turn away from the countryside like so many others, they have embraced farming, using their talents and knowledge to demonstrate its enormous commercial possibilities. In other words, they practice what they preach, and this lends real credibility to their message about the value of technical and policy innovation in agriculture."

According to the AGRF, the U.S.$100,000 prize celebrates Africans who are taking control of Africa's agriculture agenda. It puts a spotlight on bold initiatives and technical innovations that can be replicated across the continent.

The award also consists of a trophy of recognition.

Rwanda Wins Bid to Host Continental Agriculture Body
Tagged:
Copyright © 2019 allAfrica.com. All rights reserved. Distributed by AllAfrica Global Media (allAfrica.com). To contact the copyright holder directly for corrections — or for permission to republish or make other authorized use of this material, click here.