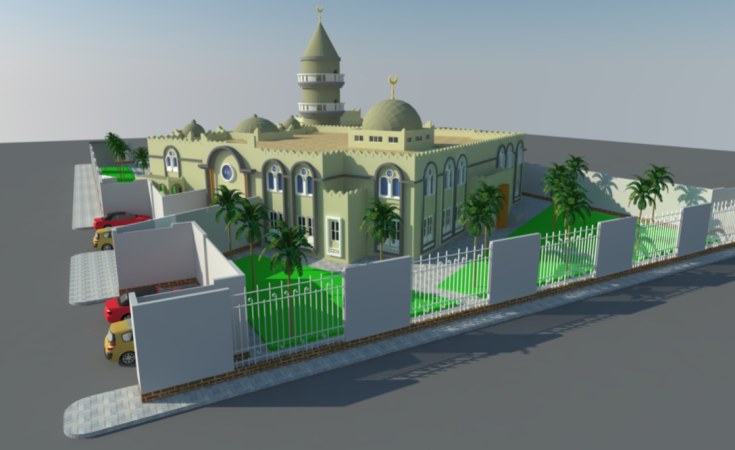 Photo: Bureau d'Etudes et de Maîtrise d'Œuvre
3D model of the Masjid Al Rayan, Djibouti.The initial idea of Masjid Al Rayan came from providing a place for worshipers who had to vacate their original neighbourhood in the old district of the capital. However, thanks to personal interest and generous funding by businessman and philanthropist Mohamed Said Guedi, the scope of the project has only expanded.
Content from our Premium Partner
AllAfrica InfoWire (Washington, DC)

Just few kilometres from the centre of the capital city of Djibouti, experts are putting final touches on what is tipped to be the second   largest mosque in the country.

The initial idea of Masjid Al Rayan came from providing a place for worshipers who had to vacate their original neighbourhood in the old district of the capital. However, thanks to personal interest and generous funding by businessman and philanthropist Mohamed Said Guedi, the scope of the project has only expanded .

The majority of those who had to start a new life in Nassib had lost their homes to a massive fire in the old inner part of the capital in 2017, which destroyed over 200 properties.  Displaced and distressed, they deserved a wider, cooler place where they could not only pray but also reorganise their community life. Answer to their prayers could not have been better than a beautiful mosque, equipped with modern facilities.

The development   has since benefited from a paved road, a power line with public lighting and a water supply system. The city has also benefited from physical and social infra structure, and in the midst of these developments the one piece of architectural beauty that is destined to stand-out is Masjid Al Rayan.

A piece of land spread over five thousand square meters was provided by the Ministry of Welfare WAQF and the project included construction of a mezzanine with a total surface of 1,460m² that can accommodate 1,000 men in the main hall and 400 women at the mezzanine level.

However, Al Rayan is not only a place of worship but also offers a school facility, accommodations for the employees of the mosque, and shops. It was the intention of the donor to ensure that the mosque becomes the heart of this community.

The double-domed design, supplemented by giant chandeliers and a 21.5-meter high minaret is inspired by the great Fā ṭ imid mosques of Cairo—Al-Azhar   and Al- Ḥ ākim with the latest technologies and luxuries .

Al-Rayan was designed in the traditional hypostyle plan with axial cupolas.

Since its inception, Mr Guedi, who is also the Chairman of MSG Group of Companies , has always taken deep interest in the progress of his project as it is close to his heart. Be it at the design and construction stage of a beautiful commercial block attached to the mosque, sanitary work for ablution, or the parking facility, Mr. Guedi has always kept himself informed of the progress and financial requirements of the project.

As the third stage of the project starts in Djibouti, Mohamed Said Geudi is already preparing a twin, that will be based on the same architectural design as Al-Rayan mosque in Hargeisa, Somaliland.   The Hargeisa mosque will be even bigger and will cover nearly double the area of Al-Rayan.

As a part of his many charitable contributions in the region of the Horn of Africa, Mohamed Said Guedi has funded various road projects such as Dawga Camuud and Dawga Caad, maintenance of Hargeisa Airport road, maintenance of Hargeisa local government roads, rehabilitation of Doobo mountain road, and reconstruction of roads in the district of Dar es-salam outside Hargeisa, Somaliland.

Guedi has also set up an education fund within the MSG Foundation for less fortunate students in Somaliland and Djibouti. The MSG education fund helps at least 20 students every year in graduating from the local and international universities.

He has also played an effective role in time of calamities and national disasters with food and water donations to 500 families in  Odhweyne affected by drought.