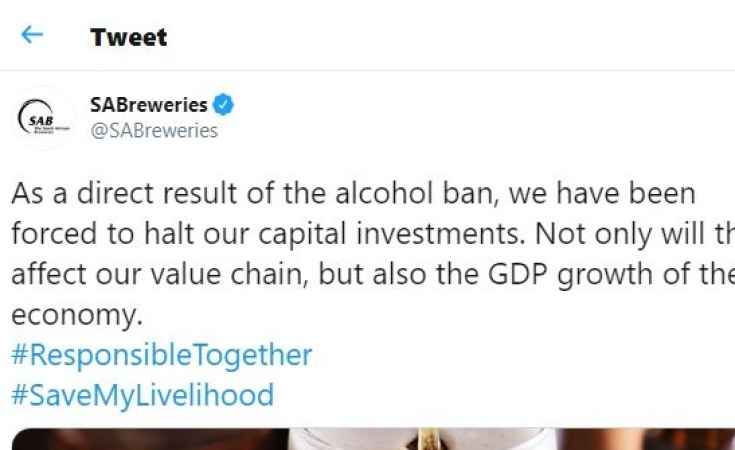 @SABreweries/Twitter
An SA Breweries tweet about its cancellation of investments.
allAfrica.com

SAB, which is owned by the world's largest brewer Anheuser-Busch InBev, said in a statement that it had cancelled R2.5 billion planned expenditure for this financial year, while the other half for the next financial year remains under review.

"The cancellation of this planned expenditure is a direct consequence of having lost 12 full trading weeks, which effectively equates to some 30% of SAB's annual production," SAB vice-president of finance Andrew Murray said in the statement.

Fin 24 reports that alcohol sales were prohibited as part of the country's initial lockdown in late March. The ban was later relaxed, but was reintroduced in mid-July following a rise in trauma cases. The state has said the ban is necessary to keep the country's hospitals free from trauma victims as Covid-19 cases rise.

Covid-19 'Pillaging' Rears its Ugly Head in South Africa
Tagged:
Copyright © 2020 allAfrica.com. All rights reserved. Distributed by AllAfrica Global Media (allAfrica.com). To contact the copyright holder directly for corrections — or for permission to republish or make other authorized use of this material, click here.