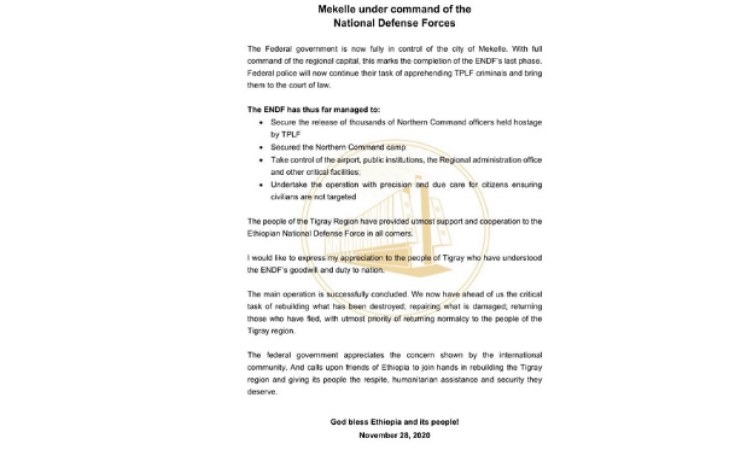 In a statement released on Twitter, Ethiopian Prime Minister Abiy Ahmed Ali said the Ethiopian National Defense Force (ENDF) has taken control of Mekelle, capital of the Tigray Province. In a reference to leaders of the Tigray Peoples Liberation Front, he added: "Federal police will now continue their task of apprehending TPLF criminals and bring them to the court of law."

In a later Tweet, he said "we have completed and ceased the military operations in the #Tigray region," adding: "Our focus now will be on rebuilding the region and providing humanitarian assistance while Federal Police apprehend the TPLF clique." With communications to Mekelle cut, there has been no independent confirmation of the status of the city or the extent of casualties. Some observers believe the TPFL leadership may have departed and gone into hiding in preparation for launching a guerrilla campaign.

On Friday, Abiy met three envoys sent by the African Union - Liberia's Ellen Johnson Sirleaf, Mozambique's Joaquim Chissano and Kgalema Motlanthe from South Africa - who have been seeking a negotiated solution for the conflict, which has already displaced 43,000 Ethiopians, according to UNHCR. In a Tweet after the meeting, Abiy expressed "utmost gratitude to President @CyrilRamaphosa & his Special Envoys for their concerted effort to understand our rule of law operations," he said in a Tweet. "Receiving the wisdom & counsel of respected African elders is a precious continental culture that we value greatly in Ethiopia." The African Union in a communique described the positions outlined by the prime minister but gave no indication of any further actions by the envoys.

After giving the regional TPLF forces 72 hours to surrender on November 23, Abiy urged international actors not to intervene and said that Ethiopia was capable of resolving the situation internally. Mekele has a population of about 500,000 people, half of them children.Fears have also been expressed for the nearly 100,000 Eritrean refugees who are living in overcrowded camps as aid workers warn of dwindling humanitarian supplies. Neighbouring Sudan has said the country is unable to keep up with the flow of Ethiopian refugees across its border.

Here is the full text of the prime minister's latest statement:

Mekelle under command of the National Defense Forces

The Federal government is now fully in control of the city of Mekelle. With full command of the regional capital, this marks the completion of the ENDF's last phase. Federal police will now continue their task of apprehending TPLF criminals and bring them to the court of law.

The ENDF has thus far managed to:

The people of the Tigray Region have provided utmost support and cooperation to the Ethiopian National Defense Force in all comers.

I would like to express my appreciation to the people of Tigray who have understood the ENDF's goodwill and duty to nation.

The main operation is successfully concluded. We now have ahead of us the critical task of rebuilding what has been destroyed; repairing what is damaged; returning those who have fled, with utmost priority of returning normalcy to the people of the Tigray region.

The federal government appreciates the concern shown by the internaitonal community. And calls upon friends of Ethiopia to join hands in rebuilding the Tigray region and giving its people the respite, humanitarian assistance and security they deserve.

Ethiopia Govt Questions Talk of Tigray Guerrilla War
Tagged:
Copyright © 2020 allAfrica.com. All rights reserved. Distributed by AllAfrica Global Media (allAfrica.com). To contact the copyright holder directly for corrections — or for permission to republish or make other authorized use of this material, click here.