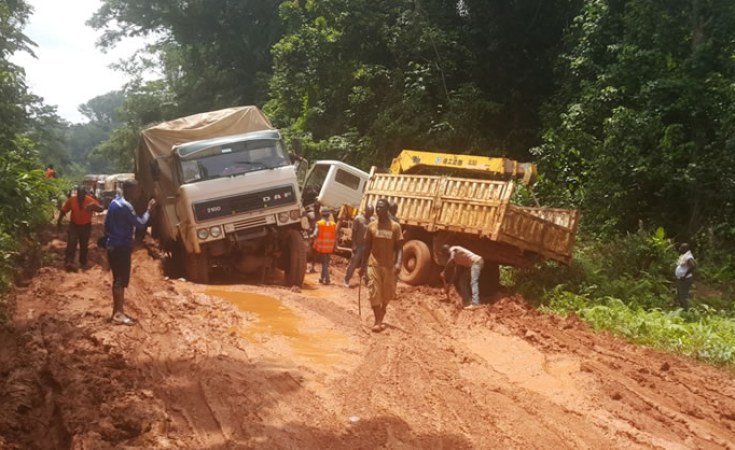 FrontPageAfrica
Large and small vehicles get stuck on poor roads in rural Bong County, as in other areas of Liberia. Particularly during the long rainy season, even pedestrians have difficulty navigating flooded, muddy sections. The administration of President Ellen Johnson-Sirleaf launched a public works programme, and the administration of President George Weah has pledged to continue the re-building, but burdens of debt, the crisis of Ebola and, now, the Covid-19 pandemic, have stalled many efforts. Social entrepreneurs are trying to take services to the people, rather than leaving local populations unable to access health and economic services.
allAfrica.com
By Edward Blamo

Monrovia — Farmers in rural Liberia have limited access to facilities to process their crops or markets to trade them. Pothole-ridden roads pose particular challenges, resulting in adoption of unorthodox practices.

Desperate to sell at least some of their produce, farmers in some areas have resorted to filling the most gaping holes with kilograms of palm fruits or rice - a strange phenomenon in a country that is food insecure. The fillings must continually be replaced, as traffic and weather wear them down. This sacrifice of portions of their harvest makes it more difficult to break through the shackles of traditional subsistence farming and create reliable sources of income to empower families and communities.

Enter J Palm Liberia, founded in 2013 by Mahmud Johnson, a young social entrepreneur. The company aims to boost thousands of Liberians out of poverty through responsible, sustainable methods of producing palm oil. It purchases palm kernels from smallholder farmers and processes them into palm kernel oil. That business model is a departure from ancient practice.

Typically, palm fruit is harvested from communally-owned trees, which largely grow wild. This distinguishes much of Liberia's palm oil production from the multinational corporate practice of clearing large areas to cultivate palm trees and means Liberia avoids the widespread environmental destruction common in the global market.

Traditional practice harvests fruit from communally-owned palms trees and squeezes oil from the soft outer layers of the fruit, often by hand. The inner palm kernels are too hard for manual extraction of the oil.

"Instead of the palm kernel going to waste as is done in most communities, most of whom throw it into the river or burn it - both of which are forms of pollution - they can sell to us. We use it to produce our skin products and export part of it to the United States", says J Palm founder and CEO Johnson.

In contrast to multinational corporate norms, which clear vast tracts of old forests to plant palms for commercial harvesting, Johnson's enterprise operates mills in partnership with the rural communities that collectively own land upon which palm trees grow wild. The company's mills extract oil from the hard kernels, processing the oil at no up-front cost. In return, farmers pay the company 15% of the oils produced.

As J Palm has grown, it has added palm kernel oil products for the consumer market, domestically and abroad. The line includes personal care and baby care products as well as foods.

Johnson says that through a partnership agreement with U.S. based Pacha Soap, J Palm is setting up an international supply chain targeting small farmers.  "We are going to be producing palm kernel oil that this company can use in their products and exporting to the United States," he says.

Through that transaction, small holder farmers in Liberia directly benefit. "If you think about an American citizen going into Walmart or where Pacha Soap sells its products and buys soap, part of the proceeds benefit a farmer in Liberia."

More changes for the company and the local producers is coming through a supporting grant of US$250,000 from the United States African Development Foundation (USADF), Johnson expects around 6,400 farmers in Bong County to benefit.

allAfrica.com
Liberian children who are supposed to be in school must sometimes try to sell farm products to keep their families afloat.

"We are going to build about 20 mini-mills in 20 different communities in rural Bong County [in remote north-central Liberia, bordering neighboring Guinea]. Farmers in those areas can harvest their palms and bring their harvest to the processing sites and process their oil right there," he said.

Johnson believes the new mills will ease the headaches of farmers. Manual methods take up to eight hours to process about 200 kilograms of palm oil. "The new machines we are installing save time from eight hours to 30 minutes, and use less manpower. It also saves them cost, because you do not need to pay for assistance to help you make oil," he said.

The project, he said, will also help alleviate the age-old 'market days', when farmers are restricted to trade on a stipulated day. "In most parts of Liberia", he explained, "there is no way to sell your produce when it is not a market day. Even on market days, some people have to walk two to three hours to get to the market to sell their produce. And that limits how much they can trade. You cannot take all your produce to the market, since you are walking to get there. All of those things reduce the productivity of the farmers.

In addition to J Palm, USADF has supported 122 other enterprises in Liberia since 2006, with investments of over U.S.$10 million dollars. "Right now, as we speak, there are about 15 active grants," said Deola Famak of Educare Liberia, the local partner for USADF. "Some are agro-based and some are energy and, of course, [there is] the Young African Leaders Initiative.

Famak said there are active grants covering about 16 enterprises using around U.S.$ 1.7 million. "Some of them are getting one hundred thousand dollars, and we still have two or three of them that are active and getting two hundred and fifty thousand dollars."

"We have a cocoa grantee that will produce chocolate. That grant has just been signed. We have one working in the rice value chain. We have another working in the cassava value chain. And we have one group in Bong County. They are actually working with palm farmers, but they are renewable energy. USADF has provided them support to acquire equipment, which the farmers can use to mill their palm. As it does that, it produces electricity. That electricity is going to be used to power the village. It is an example of our agro-electricity hybrid project," she said.

Liberia suffered conflict for a quarter of a century, and the country's agriculture sector still has a long way to go to surpass its pre-war levels. With the involvement of USDAF and other top dollar bilateral partners, J Palm and others local enterprises are optimistic they can be game changers in a sector being nursed on life support.

J Palm's growing line of consumer products is part of that process. "That's the kind of change we want to see in the world," said Johnson, "where every consumer can make an impact by being more conscious about the products they use."