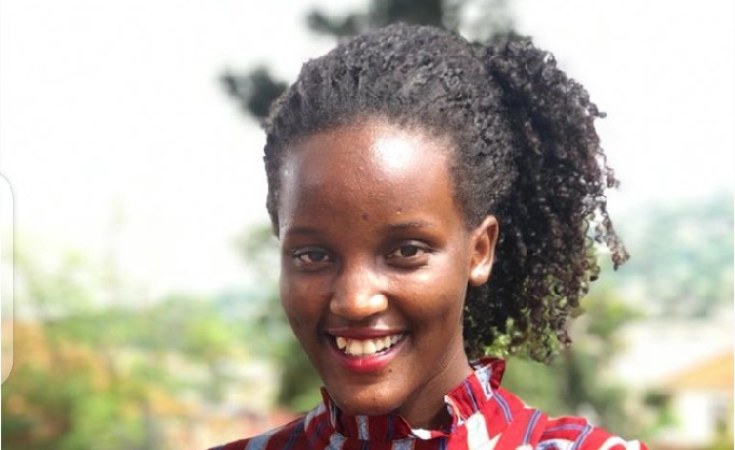 For months she was the lone protester outside the gates of Uganda's Parliament, but this didn't discourage her. Then more young people responded to her calls on social media to draw attention to the destruction of rainforests in the Democratic Republic of Congo.

It seems that Nakate's courageous climate activism may be getting greater recognition internationally than her home country.

Some Ugandans say she's a fraud, doing all this for money. They claim what Nakate describes to the international community is all false.

At the sidelines of  the COP26 UN climate summit in Glasgow, Nakate told the crowd that people in her native Uganda were "being erased" by climate change. "People are dying, children are dropping out of school, farms are being destroyed," she said. "Another world is necessary. Another world is possible."

These words were not met by the encouragement and support you would expect. "Can she clearly explain how climate change has actually led to increased rate of school dropout. She has a cross to carry as she accepts to be used to manufacture consent," Ziwa responded in a tweet.

"Has Nakate ever crossed to cattle corridor and see beautiful farms? But she has not died, didn't drop out of school, why is she giving a negative to the muzungu about her country? What favor is she buying from them? I now know why they used to crop out her picture," said one Rashid Shaban.

This refers to an incident of blatant racism that Nakate experienced while attending the 2020 World Economic Forum in Davos, Switzerland. Here was a young black African woman posing for a photo with other white activists, including Greta Thunberg, but when Associated Press published the photo, they cropped Nakate out.

How does one react to that?

Nakate tweeted: "You didn't just erase a photo, you erased a continent, but I am stronger than ever." And indeed she is.

Despite the challenges of access and representation for activists and indigenous peoples at COP26, Nakate's presence - inspired, she says, by Thunberg's activism - has been felt and she is undeterred by the setbacks. Her statements on the effects of climate change on people and the environment has received some support from other young Ugandans who are more aware of the Africa's climate crisis.

One of the young women that came to Nakate's defence is Cynthia Kinyera, a Ugandan writer who cares about the environment and supports those that are at the forefront of raising awareness and demanding action.

Kinyera says the negative comments about Nakate made her angry. "Those comments had really rubbed me the wrong way and I debated whether I should even tweet in the first place. I was angry that people were trying to discredit someone who has put in years of their life to fight for a cause that affects all of us. The time they spent tweeting their wrong accusations could have easily been spent Googling who Vanessa is and the work she has done," she said to allAfrica.

'It's shocking how much people simply refuse to care'

Seeing other young Africans spreading awareness gives us some hope that despite the challenges, the cause is not lost. However, it's clear that we need to do more to support young people who are passionate about our survival as a species because without their direct involvement, we are facing a very bleak future.

The World Health Organization has already warned us that climate change is now the single biggest health threat facing humanity, but scientists have agreed that the worst impacts can be avoided with coordinated and rapid climate action. That rapid climate action is falling short.

"Climate activism is a tough task which can take a lot out of a person. When I first learned about the climate crisis, I spent a lot of time reading up on it and tried to spread awareness online, and was met with an overwhelming amount of disinterest. It's shocking how much people simply refuse to care, considering that the climate crisis is truly the only problem which affects every human being on earth. Eventually, I ran out of steam but I have always hoped to do more for the cause. This is why I admire Vanessa Nakate. She has the strength and perseverance to work for the greater good that most of us don't," Kinyera said.

"There have been dozens of government environmental projects and campaigns over the years, but most have either been poorly planned or just done for the sake of appearances. The fact that the average Ugandan has never heard of climate change makes it painfully clear how little awareness there is. Everyone is affected by it to some degree, even if you may not realise it yet.

"Some of the effects will become irreversible fairly soon. Climate activists are often told not to be alarmist, but sometimes the truth is alarming. These things are not said to scare anyone, but rather to inform them of what the reality actually is. There is still hope. If we put in the necessary effort the crisis can be averted," Kinyera told allAfrica.

At COP26, Nakate called out leaders for the failed promises of past climate summits. She challenges world leaders to show faithfulness, trustworthiness, and honesty.

There have been 25 COPs before this one and every year, leaders come ... with new pledges, commitments and promises. And as each COP comes and goes, emissions continue to rise.

"Countries have come to COP26 to make new pledges to reduce their emissions and lots of companies, banks and investors have descended upon Glasgow to make big climate commitments and let me say that of course the idea that countries, companies committing to drastic and immediate action to reduce emissions would be most welcome. But let us be honest, we have been here before.

"There have been 25 COPs before this one and every year, leaders come to these climate negotiations with new pledges, commitments and promises. And as each COP comes and goes, emissions continue to rise. This year will be no different, seeing emissions jump in 2021 by the second biggest annual rise in history. So I hope you can understand why many of the activists who are here in Glasgow and millions who could not be here cannot see the success that is being applauded within this halls. We do not have decades to wait for oil, and gas to be phased out," Nakate said.