HAM vs DTB Case: DTB Admits to Committing Illegalities, HAM Files and Awaits Judgement on Admissions in their Submissions 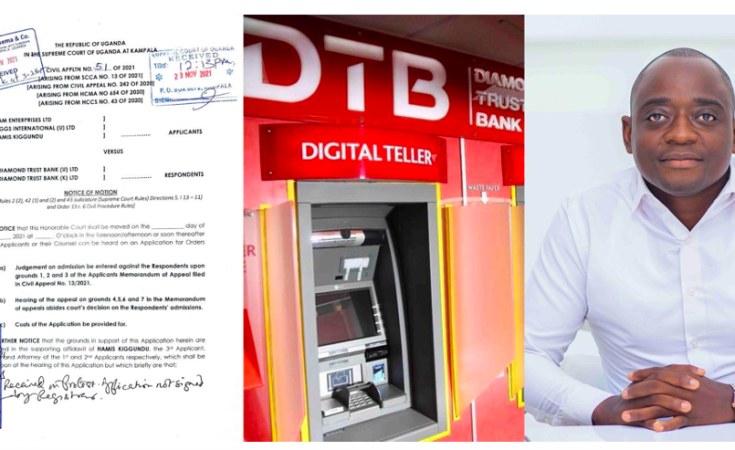 Busayo Sotunke
Diamond Trust Bank (DTB) had earlier admitted committing illegalities at high court on court records, the bank has additionally at supreme court admitted failure of the Court of Appeal to address the substantial point of illegality hence Ham has applied and awaits judgments on count of the Bank’s admissions.
Content from our Premium Partner
AllAfrica InfoWire (Washington, DC)
By Busayo Sotunke

Ham Enterprises (U) Limited (The company) and Diamond Trust Bank (The Bank) had a 10 Year long term Banking relationship where Ham Enterprises (U) Limited as the client made huge transactions on its accounts with the bank equally extending Loan facilities to the company and the company would promptly pay off these loans until an outstanding balance of USD 10,000,000 (United States Dollar – Ten Million only) which the company claims was not reducing despite having paid huge amounts of money towards loan clearance over time.

The legal audit furthermore revealed that Diamond Trust Bank was carrying out illegal transactions in a bid to avoid paying government taxes contrary to the laws of Uganda specifically as guided by the Financial Institution Act and equally contrary to the Bank of Uganda customer consumer protection guidelines.

On 17th Jan 2020, Ham Enterprises (U) Limited hence filed a suit at the commercial court for recovery of the excessive money unlawfully debited from its accounts, equally bringing these acts of illegalities committed by the Diamond Trust Bank to the court's attention.

On 7th October 2020, judgement was entered against the Bank based on fact that the Bank on court record admitted to committing illegalities by carrying out financial institution business in Uganda without a license as required by section 117 of the Financial Institution Act, and DTB Uganda acting as DTB Kenya Agent without approval in contravention of Regulation 5 Of The Financial Institutions (Agent Banking) Regulations 2017 and Section 126 (3) of the Financial Institutions Act as well as the relevant laws of Kenya making the bank to become a principal offender as provided for under section 19 of the Financial Institutions Act having taken part in and facilitated the commission of an offence. There was also no counter claim by Diamond Trust Bank in regard to any outstanding unpaid loans by Ham Enterprises (U) Limited to the Bank. The judgment equally directed the bank of Uganda to protect the Ugandan economy from illegal hemorrhages and uncontrolled flows of financial resources and to ensure that financial institutional business in Uganda is operated within the letter of the law to protect the nascent banking business industry in Uganda

On 20th October 2020, The bank appealed against the judgement of the commercial court on grounds that there was no illegality committed contrary to the Financial Institution Act

On the 5th May 2021  a panel of three Honorable Judges headed by Hon. Justice Richard Butera, Hon. Justice Kenneth Kakuru and Hon.  Justice Christopher Madrama ruled in favor of the Diamond Trust Bank, setting aside the High Court judgment without addressing the issue of illegality despite it being the substantial ground of appeal as filed by Diamond Trust Bank. The Court of Appeal concluded by ordering a retrial at the high court while excluding the amended plaint that had raised the point of law of illegality committed by Diamond Trust Bank thereby promoting and shielding the illegalities as committed by the bank contrary to the Financial Institutions Act.

On 12th November 2021, the supreme court allowed the bank's request to highlight submissions on grounds not contained in their memorandum of appeal on a matter not subject of appeal and parties were asked to submit on the same within 13 days. Diamond Trust Bank in their Submissions admitted that the Court of Appeal failed to address the Substantial point of illegality upon which judgement was rightfully entered at the high court specifically stating in their submissions that: "The learned Justices were entitled to first deal with the grounds  regarding the procedure adopted by the trial Judge in striking out the  defendants' pleadings and granting the impugned orders before  dealing with the other grounds" and on 23 November 2021, Ham applied and awaits judgement on the admissions by the Bank.

Watch the Space, We shall keep you posted.