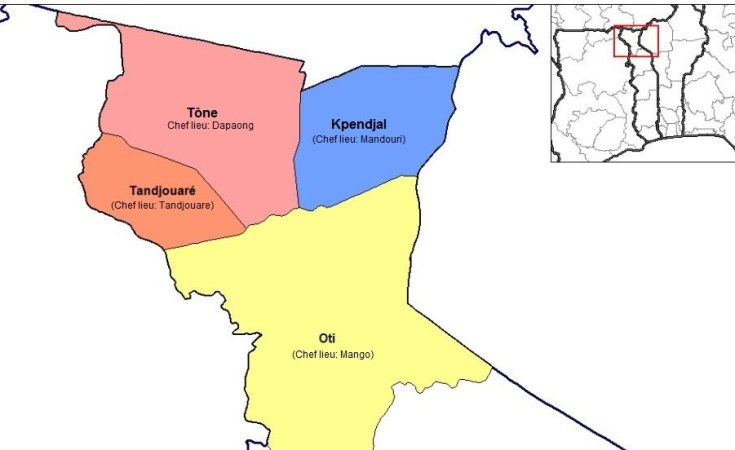 Lielogoundo / Wikimedia Commons (CC BY-SA 3.0)
A map showing the prefectures of Togo's northern Savanes region. In July 2022, seven people died in in the Tone prefecture near the border with Burkina Faso.
Voice of America (Washington, DC)
By Matteo Fraschini Koffi

Lome, Togo — Authorities in Togo are working to prevent their small, West African nation from becoming the next country in the region to struggle with a violent, spreading, Islamist insurgency.

Saturday's deadly explosion could mark a turning point if it's confirmed that the seven minors killed were the first civilian casualties in the conflict.

Togo's military did not immediately confirm the cause but local media reported the victims were killed when an improvised explosive device went off.

In June, Togo declared a state of emergency in its northern Savanes Region after Islamist militants attacked near the border with Burkina Faso in May, killing eight troops and wounding 13.

They were the first recorded deaths from terrorism in Togo, a country of 8 million people wedged between Ghana and Benin on the West African coast.

An al-Qaida-affiliated group fighting in Burkina Faso and Mali claimed responsibility for the attack.

But Togo authorities are also concerned that Islamists are recruiting disaffected youth for domestic terrorism and have formed the Inter-ministerial Committee for the Prevention and Fight Against Violent Extremism (CIPLEV).

Ouro-Bossi Tchacondoh, the committee's rapporteur, said the group exists to capitalize on the thoughts and requests of the local population. He said it centralizes information and sends it to a committee of ministries that analyzes it and delivers its conclusions to the government. He said his group aims to find and study the vulnerabilities that can attract citizens or, more specifically, young people to violent extremism.

While there are no confirmed reports of Togolese being recruited by insurgents, analysts say dealing with the emergence of terrorism means going beyond security operations.

Michel Douti, an independent security expert working with Togo's committee against extremism, said Togolese security forces have the men and the women necessary for the fight against violent extremism. But no country in the world is immune to this phenomenon, Douti said. More important, he said, is the collaboration between security forces and the local population.

Aid groups, including religious ones, are also looking at ways to prevent Togolese youth from being recruited.

Stanislas Namitchougli, who is with the Episcopal Council for Peace and Justice in Dapaong, northern Togo, said the council has initiatives that help young people avoid being influenced by extremist groups. He said they are working with the U.S.-based Catholic Relief Services on a study that shows how youth might join these groups because of lack of jobs or education.

Namitchougli said they are also trying to build some basic infrastructure like markets and schools to give economic opportunities to youth considered prone to violent extremism.

Security experts on Africa's Sahel region note that Islamist violence has been spreading, despite security crackdowns, including by neighboring military governments in Burkina Faso and Mali.

Jeannine Ella Abatan, a researcher on violent extremism and security in the Sahel at the Dakar office of the Institute for Security Studies, said, "This already shows the capacity of violent extremist groups to actually stage attacks in those countries to instrumentalize the porosity of borders to go to those countries but also pose explosive devices.

"In Benin we have a number of attacks with improvised explosive devices. But beyond these attacks, at the ISS, what we've been doing is actually to look at the extension of violent extremism beyond what we see as attacks, because for us that is only the tip of the iceberg."

The Togolese government is also working with Western partners and Gulf states to train their military and fund projects to help locals.