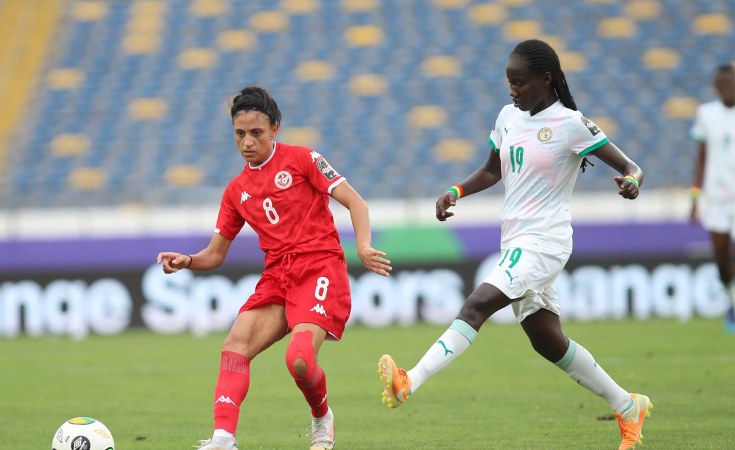 Senegal qualified for the inter-continental play-offs for the World Cup next year after beating Tunisia 4-2 on penalties at the TotalEnergies Women's Africa Cup of Nations in Casablanca on Sunday.

The Lionesses of Teranga wrote their names in the history books of African women's football when they picked one of the two slots for the playoffs in New Zealand.

The West Africans recovered from their quarter-finals disappointment to see off Tunisians at the Complexe Sportif Mohamed V.

The Lionesses secured the playoff spot with the victory in the post-match penalty shootouts after a scoreless stalemate in regulation time.

Senegal head coach Serigne Mousse Cissé made two alterations to the team that lost on penalties to Zambia in the quarter-finals of the tournament four days ago.

Ndeye Diaw was preferred to Teneng Sene between the sticks whilst Hapsatou Diallo's place in the starting lineup was taken by Jeane Niang.

Tunisia manager Samir Landolsi on the other hand made only one change to the squad that started in the quarter-final defeat to South Africa a few days ago.

Senegal dominated the exchanges with striker Nguenar Ndiaye missing the first opportunity in the 10 minute after making light work of three defenders.

Nine minutes later Ndiaye's powerful shot from the edge of the box was brilliantly saved by the Tunisian goalkeeper Jabrani Soulaima.

Another glorious chance fell to attacker Mama Diop in the 35ti minute but her piledriver went narrowly over the bar.

The Senegalese continued to pile the pressure in the second-half but the Carthage Eagles were content with sitting back and relying on counter attacks.

The substitute stopped Hapsatou Malado Diallo's penalty but could not respond to the four kicks of Mama Diop, Mbayang Sow, Nguenar Ndiaye and Korka Fall respectively.

For Tunisia only Sabrine Elouzi and Samia Ouni scored in the penalties which led to Senegal's qualification to the Fifa Women's World Cup playoffs.

Four countries to represent Africa at the Fifa Women's World Cup to be played in Australia and New Zealand next year have already been decided.

The sides that clinched their places in the semi-finals of Africa's women football's flagship tournament automatically qualified for the global competition next year.

Hosts Morocco, Nigeria, South Africa and Zambia will play at the World Cup after they all advanced to the last four of the tourney in the North African country.

Two other African countries must join eight countries from around the world in the inter-confederation playoffs scheduled for February next year.

FIFA's decision to expand the tournament from 24 to 32 teams from the 2023 edition of the Women's World Cup resulted in more places for Africa.

The inter-confederation playoff has three more slots available for the World Cup but ten countries must fight to grab the places.

Senegal will be joined by the winner of the match between Cameroon and Botswana later on Sunday night as the two countries to represent Africa in the playoffs.

The two African countries will join Panama, Haiti, Thailand and Chinese Taipei who have already qualified for the competition to be played early next year.

The competition will be played from 18 to 23 February in New Zealand at the Waikato Stadium in Hamilton and Auckland's North Harbour Stadium.