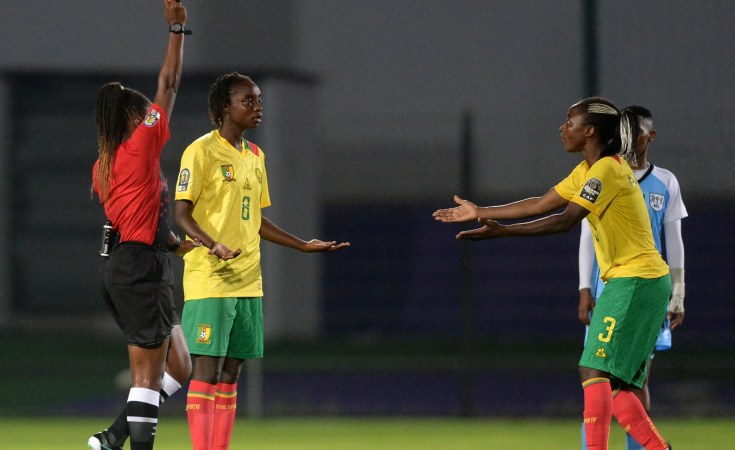 Ten-woman Cameroon qualified to play in the inter-continental play-offs for the World Cup next year after beating Botswana 1-0 at the TotalEnergies Women's Africa Cup of Nations in Rabat on Sunday.

The Indomitable Lionesses clinched their place thanks to a first-half powerful strike by captain Ajara Nchout at the Stade Prince Moulay Al Hassan in Rabat.

Despite losing substitute Fadimatou Aretouyap late in the game, Botswana could not make their numerical advantage count as the Lionesses held on to qualify.

Cameroon made amends from their quarter-finals defeat to Nigeria to beat debutantes Botswana to claim a spot for the inter confederation playoff for a place in 2023 Women's World Cup.

They could have won the match by a wider margin but for the agility of Mares goalkeeper Sedilame Boseja who pulled off a string of fine saves.

Boseja denied Nchout four times with the Cameroon captain firing long-range efforts from the edge of the box which were all effectively saved.

But the Botswana shot stopper could not deny Nchout just before the break when the latter took a loose ball from before hitting a piledriver to the bottom corner moments before half-time.

The Lionesses were reduced to ten women after substitute Aretouyap was sent off six minutes from time following a very dangerous tackle on Tholakele.

Botswana's best chance of the match fell to striker Refilwe Thokalele late in the game but goalkeeper Ange Bawou was alert to prevent the Mares from restoring parity to help her country to reach the playoffs.

Four countries to represent Africa at the Fifa Women's World Cup to be played in Australia and New Zealand next year have already been decided.

The sides that clinched their places in the semi-finals of Africa's women football's flagship tournament automatically qualified for the global competition next year.

Hosts Morocco, Nigeria, South Africa and Zambia will play at the World Cup after they all advanced to the last four of the tourney in the North African country.

Two other African countries must join eight countries from around the world in the inter-confederation playoffs scheduled for February next year.

FIFA's decision to expand the tournament from 24 to 32 teams from the 2023 edition of the Women's World Cup resulted in more places for Africa.

The inter-confederation playoff has three more slots available for the World Cup but ten countries must fight to grab the places.

Cameroon joined Senegal as the two countries to represent Africa in the playoffs after the two sides won their matches on Sunday.

The two African countries will join Panama, Haiti, Thailand and Chinese Taipei who have already qualified for the competition to be played early next year.

The competition will be played from 18 to 23 February in New Zealand at the Waikato Stadium in Hamilton and Auckland's North Harbour Stadium.