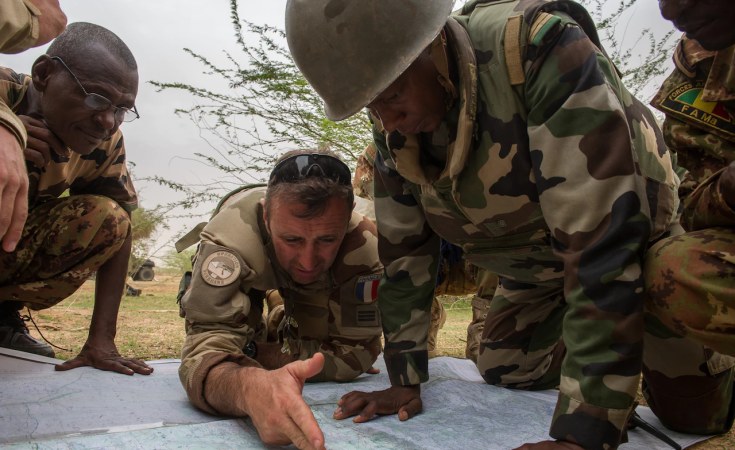 Cape Town — France seems to be losing the grip it once had on its former colonies, and the rift is growing every day.

"Sixty years on, francophone countries in Africa still do not have true independence and freedom from France," Nathalie Yamb, adviser to Ivory Coast's Freedom and Democracy Party (LIDER), told Deutche Welle in 2020. Even the content of school textbooks was often still determined by France, Yamb said, and the political systems in many of the countries were introduced by France.

After France had fallen out of favour in its former North Africa colonies, sub-Saharan African countries such as Mali, Burkina Faso and the Central African Republic began to question their former coloniser's involvement in their economies and governments.

The French army intervened in Mali in 2013, in Operation Serval, after northern Mali was taken over by Islamist militant groups in 2012. Operation Serval was replaced by the anti-insurgent Operation Barkhane in 2014, but a deployment that began with fanfare and friendship ended in the last unit of the French military mission crossing into neighbouring Niger in August 2022 after a major fallout with Malian authorities.

This happened two years after Mali citizens, angry at their government's failure to stop violence, took to the streets in some of the country's biggest demonstrations in years. At the height of those 2020 protests, soldiers staged a coup d'état, arresting President Ibrahim Boubacar Keïta and forcing him to resign.

Since taking power, the military junta has enjoyed a wave of popularity and the French, seen as complicit in Keïta's administration, has fallen even further into disfavour. According to the head of Malian diplomacy, Abdoulaye Diop, the Bamako regime is setting conditions for the restoration of relations with France, saying Paris must respect its "strategic choices".

"Mali wants its sovereignty to be respected, our strategic choices and our choice of partners to be respected, and the vital interests of Malians to be taken into account," Diop told the 8th Dakar International Forum on Security and Peace in Africa.

"If these elements are observed, Mali has no problem dealing with any partner, including France," Diop said. Asked about his accusations against France in a letter sent in August to the United Nations Security Council (UNSC), denouncing "repetitive and frequent violations" of Malian airspace by French forces, Abdoulaye Diop said his country was waiting for a special UNSC session on Mali.

"Malians are not children, we are members of the United Nations, we know the rules. We have requested a special session to be able to discuss this issue," he said.

In March, Russia delivered Mi-35M attack helicopters and an advanced air radar system to Mali. The delivery was in addition to at least four helicopters and weapons Moscow had already provided since developing ties with the junta leader, according to the Anadolu Agency, a Turkish news agency.

Russia's collaboration with Bamako is worrying Western nations. Of even greater concern to the West is Moscow's dispatch of "military instructors" to Mali. France says they are operatives of Russia's Wagner group.

France may be walking the same path with the Central African Republic (CAR) as it has with Mali in the past two years.

The CAR suspended imilitary co-operation with Fraance in 2021. Now a fire that broke out in the PK5 district of the capital,Bangui, on October 23, is being blamed on French forces. A report in Brussels-based Camer.be speculates that a fuel depot explosion was orchestrated by the French to destabilize the country "because it cannot accept the fact that it has lost its former influence".

The explosion came after the French Embassy in Bangui notified the CAR's government of a timetable for the withdrawal of French troops from the country.

TotalEnergies, a French petroleum group in the CAR is also under fire. CAR Presidency spokesperson Albert Yaloké Mokpeme has accused the company of trying to "aggravate the fuel crisis in the Central African Republic". Like Mali, the CAR has sought help from Russia for its battle with militia groups. However, no evidence has been presented to substantiate the accusations against France.

However, Human Rights Watch has said there is "compelling evidence" that Russian paramilitary troops which form part of the Wagner group, are killing civilians and committing serious rights abuses. France, along with the United Nations and the European Union, has also accused what its labels as "Wagner mercenaries" of committing crimes against civilians, saying the CAR government has allowed them to pillage the country in return for military support.

In Cameroon, France is being blamed for blocking UN action over the conflict in which separatist groups say they are fighting to liberate the English-speaking northwest and southwest regions from the rest of Cameroon and its French-speaking majority.

This was highlighted when President Paul Biya said his government had tried but been unsuccessful in assimilating the English-speaking part of the country by getting them to speak French and adopt a culture of governance like those of other former French colonies.

Bordering Cameroon is Chad, where the the involvement of France continues to come under scrutiny by many Africans and international civil society organizations. They question why France would support what they consider a coup in Chad that is generating protests and deaths, but opposes similar acts in Mali and Burkina Faso.

As former French president, Jacques Chirac, once said, without Africa, France will descend to becoming a “third world” country. But the new generation of Africans appear to be longing to break from Francophone Africa's colonial past.

Tantoh is a senior editor at allAfrica.com with a special focus on conflict in West Africa and the continent