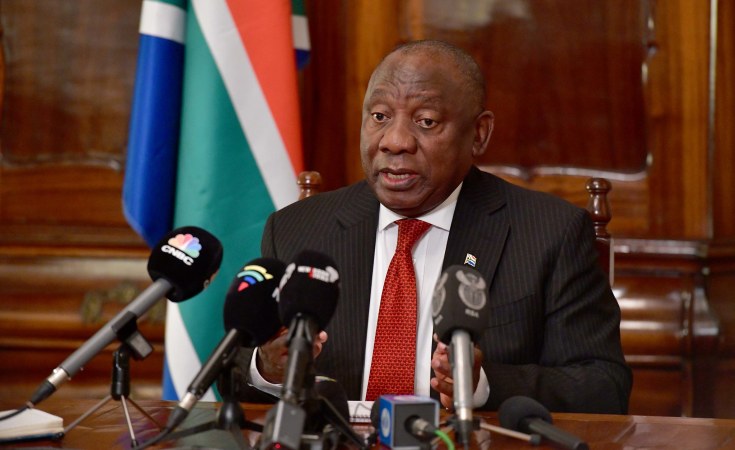 An independent panel found enough evidence to warrant a parliamentary debate on President Cyril Ramaphosa's future. It is connected to the alleged cover-up of a robbery at his private farm.

South African President Cyril Ramaphosa could be impeached after an independent panel found he "may be guilty of a serious violation" of the country's constitution.

The panel, appointed by the speaker of South Africa's parliament, found "prima facie" evidence that Ramaphosa violated his oath of office and breached anti-corruption laws.

The president is under fire over an alleged cover-up of a robbery that took place at his private farm, Phala Phala, in 2020.

An estimated $4 million (€3.85 million) was taken during the robbery, raising questions about how the president acquired the cash and whether he declared it.

"I categorically deny that I have violated this oath in any way, and I similarly deny that I am guilty of any of the allegations made against me," Ramaphosa said in a statement issued by the South African presidency.

"The conclusions of the panel require careful reading and appropriate consideration in the interest of the stability of government and that of the country," the presidency added.

He previously had said the cash was from proceeds from the sales of game.

Parliament will examine the findings in a one-day sitting on December 6 when it will decide whether to push ahead with a vote to impeach the president.

The opposition Democratic Alliance (DA) pointed out that "proceedings against the president requires a 50% majority." Ramaphosa's ruling African National Congress (ANC) has a 57% majority in parliament.

The robbery was first brought to light in June by Arthur Fraser, the country's former head of the State Security Agency and a close ally of South Africa's disgraced former President Jacob Zuma.

The criminals were apprehended and the money recovered from them, the affidavit says, but the men were then paid to buy their silence.

Fraser opened a case against Ramaphosa and senior police officials responsible for the president's security.

The allegations have tarnished Ramaphosa's reputation and overshadowed his bid for reelection to the helm of the ANC.

National Assembly Speaker Nosiviwe Mapisa-Nqakula appointed the panel in September to assess whether or not he has a case to answer.

She made the decision after a motion by a small opposition party the African Transformation Movement called for Ramaphosa's removal on the grounds of "a serious violation of the Constitution or the law and serious misconduct".

According to ANC rules, anyone charged with corruption or other crimes must step down while criminal investigations take place.

Ramaphosa has not yet been formally charged with any crimes but supporters of Zuma want him to resign.

Panel Finds Ramaphosa Has Case to Answer in Robbery Cover-Up