A group of independent human rights experts, reporting to the UN on the election process in Uganda, is calling for authorities in the country to end the arrest, detention and judicial harassment of political opponents, civil society leaders and human rights defenders. These concerns come amid an increase in violence ahead of Uganda's January 14, 2021, presidential election and include reports of the death of an opposition politician's bodyguard, along with injuries sustained by three journalists hit by teargas canisters. The group has also reiterated their concerns at the misuse and abuse of health-related restrictions to curb dissent, saying: "... time and again, we have emphasised that the fight against the Covid-19 pandemic should not be used as a pretext to infringe on fundamental freedoms. Combating terrorism should never be used as a justification to undermine the credibility of associations, or to unduly impede their legitimate work", they said.

Special Rapporteurs and independent experts are appointed by the Geneva-based UN Human Rights Council to examine and report on a specific human rights theme or a country situation. The experts are not UN staff, nor are they paid for their work. 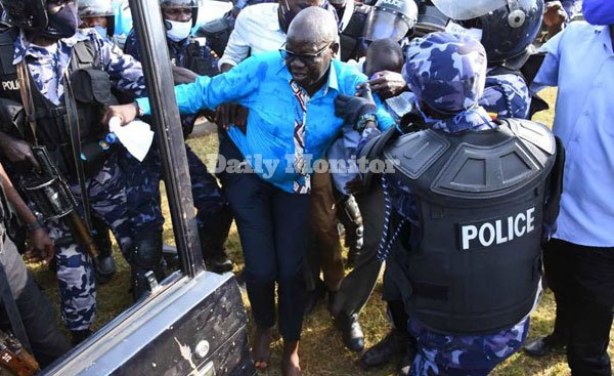 Arrest of Patrick Amuriat, presidential candidate for the Forum for Democratic Change, on November 18, 2020 in Gulu District in Uganda (file photo).