Ghanaian authorities must investigate the recent detention of three journalists, and hold to account the soldiers who interfered with their reporting, the Committee to Protect Journalists says. The organisation reports that in mid January 2021, a Joy News team were detained by a group of military officers while working on an assignment about illegal mining in a forest reserve. The officers seized a phone and camera, and deleted footage off a memory card, and held the team for several hours before releasing them. Reporter Erastus Asare Donkor told CPJ that their reporting had exposed what appeared to be a scheme involving Ghanaian soldiers assisting illegal miners. A report by the Media Foundation for West Africa quotes a spokesperson for the armed forces as saying that military authorities are investigating the alleged involvement of soldiers. Watch the team's video report here. 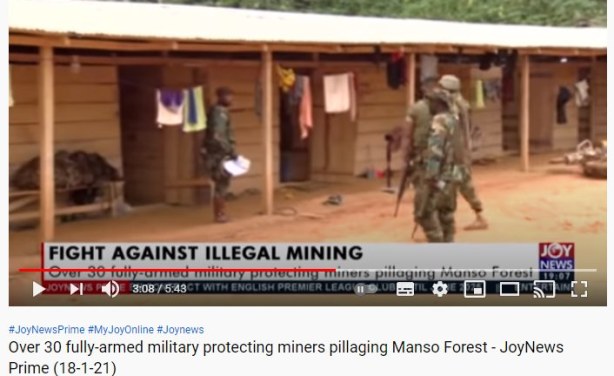 A scene from the Joy News video, showing soldiers arriving on the scene.