Nigeria's Amaju Melvin Pinnick's lobby for a seat at the Fifa executive council table has finally borne fruit. A die-hard soccer administrator, Pinnick has risen through the ranks in various roles, including being the president of the Nigeria Football Federation. Among his accolades, in January 2017, the 50-year-old was appointed a member of the organising committee for FIFA competitions, as well as a member of the Confederation of African Football (CAF) executive committee in March 2017. In 2018 he was the first vice president of CAF. He was susbsequently removed in July 2019. Pinnick was the Sun newspaper's 2016 sports personality of the year with Super Eagles coach Gernot Rohr.

His career has not been without controversy. His election as the Nigeria Football Federation president was ruled invalid on April 8, 2016 after a case was brought by his opponent Chris Giwa, whom the court ruled was the valid election winner. On April 11, 2016 FIFA wrote to the NFF stating that the court was interfering with soccer matters and that if the ruling was not overturned Nigeria would face a FIFA ban. In July 2016, then President Goodluck Jonathan appealed to Giwa to withdraw the case, announcing Pinnick the president of the NFF. On January 5, 2019 a case of fraud were brought against the NFF and a travel ban was allegedly placed on Pinnick. In May 2019, allegations surfaced of the disappearance of U.S.$8,4 million paid to the NFF by FIFA for the national team, the Super Eagles' participation at the 2014 World Cup in Brazil, which saw Pinnick and NFF executives face charges. Pinnick was also charged with not declaring all his assets. Pinnick has described the FIFA election process as "no tea party" but that it is a victory for Nigerians, Africa and global football. 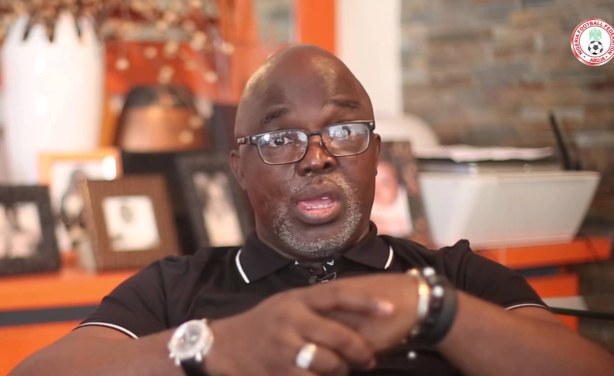