Ethiopia's media regulator is warning foreign news outlets that publishing specific references that it says mischaracterise the country's war-torn northern Tigray region will be met with legal consequences. Voice of America (VOA) reports that it has been sent a letter which reads: "In reviewing and monitoring the news reports, the Ethiopian Media Authority [EMA] has found that some foreign media are repeatedly characterizing [the Tigray People's Liberation Front - TPLF] as a national army by calling it the Tigray Defense Force or TDF." An earlier warning had been sent to at least two foreign media outlets, VOA says.

The statement sent to VOA, signed by agency chief Yonatan Tesfaye Regassa, came after the EMA revoked the licence of the Addis Standard's publisher, accusing the monthly magazine and news website - a publishing partner of allAfrica.com - of advancing the agenda of a "terrorist group," without providing more specifics. The licence has since been restored, according to an article on the publication's website.

The new coverage guidelines for the Tigray conflict come two weeks after police in the capital arrested about 20 journalists and staff from the independent broadcaster Awlo Media Center and YouTube-based broadcaster Ethio-Forum, both of which have been critical of the government. The state-appointed Ethiopian Human Rights Commission says federal police had since released three of the journalists. 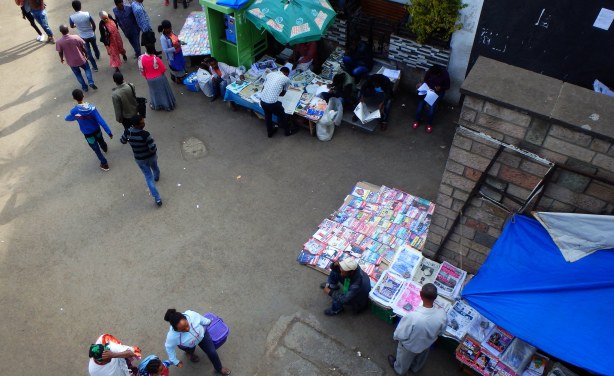 Newspaper stands in Addis Ababa in 2016.