Somalia says its lucrative fishing resources will be completely shielded from looters once a new law comes into force, which it says will provide uniform regulation in all parts of the country. A draft law by the Ministry of Fisheries and Marine Resources seeks to bring on board all state agencies at federal government level as well as the agencies in states. This would unify chaotic regulation of fishing grounds for the first time, writes Abdulkadir Khalif for the Daily Nation.

Mohamud Sheikh Abdullahi, the director-general for fisheries in the ministry, told the Nation that the country's federal structure where some states were more powerful than others had given looters the opportunity to fish illegally in Somalia's waters, as there had been no standard licensing conditions. A report by the Global Initiative against Transnational Crime in early July 2021 criticised the country's disjointed regulations for fuelling illegal fishing. The report said it had found that vessels from as far as Iran, Yemen and South East Asia had "routinely" engaged in illegal, unreported and unregulated fishing in Somali waters.

Somalia has struggled to guard its fishing grounds amid the collapse of state institutions after the fall of Siad Barre's regime in 1991. The Horn of Africa country has the continent's longest mainland coastline, estimated to be about 3,300 kilometres long. 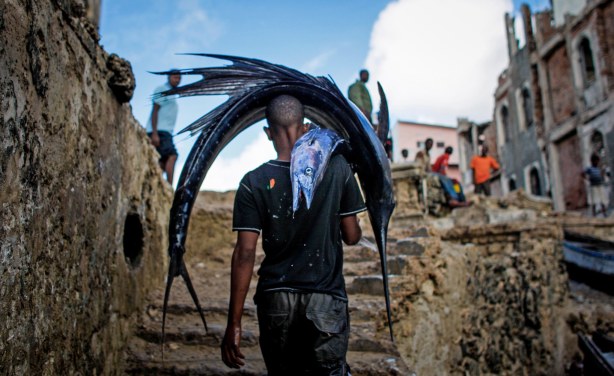 A Somali man carries a large sailfish on his head as he transports it to Mogadishu's fish market in the Xamar Weyne district of the Somali capital (file photo).