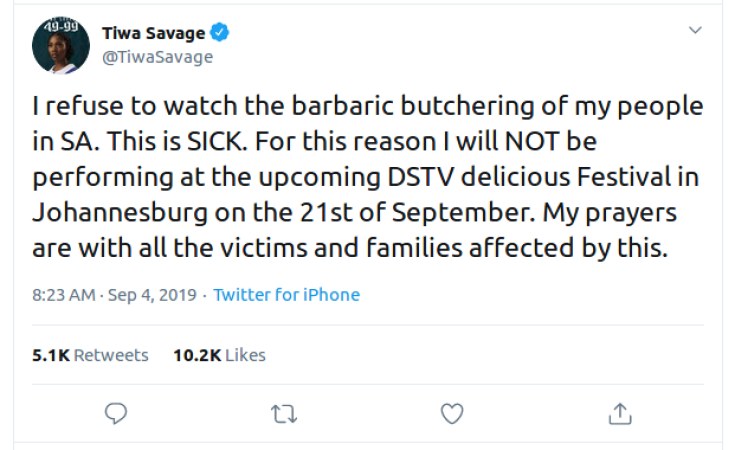 @TiwaSavage/Twitter
The Tiwa Savage tweet in which she announces she is pulling out of the DStv Delicious event.
allAfrica.com
By Renee Moodie

Cape Town — Nigerian singer-songwriter and actress Tiwa Savage has announced on Twitter that she is pulling out of a South African event because of "the barbaric butchering of my people in SA".

The tweet says in full: "I refuse to watch the barbaric butchering of my people in SA. This is SICK. For this reason I will NOT be performing at the upcoming DSTV delicious Festival in Johannesburg on the 21st of September. My prayers are with all the victims and families affected by this."

The DSTV Delicious Festival is a food and music event to be held in Johannesburg, with its website saying that the festival offers pop-up stalls, food trucks and "acclaimed music and food talent across three different stages".

Her announcement comes amid growing outrage among Africans after a spate of xenophobic attacks in South Africa.

Her tweet has not been well received, with people responding that the star is not well-known in South Africa, and that she "won't be missed".

Others say she is misinformed:

@ThusoMatsobane: No one has butchered your people but it's fine. Thanks for taking a stand. (To which Savage replied: "Killing any one that is African are my people whether they are Nigerians or not").

@Real_JerryM: Again, not a single Nigerian national  got killed here where yal are getting this misinformation is baffling.... but completely understandable.

@AmandaScott_: Nobody was butchered though Tiwa!!!!! In fact a South African taxi driver was shot by one of your countrymen hence there's such havoc in Pretoria but y'all not ready to have that conversation. It's fine, cancel us nawe. Yhuuu hhayi!

Others, however, reacted with respect:

@IsiakaSherifat: 34mOh my love, God bless you more my sister, your account will forever be blessed with awesome money and your children will grow greater than you right before your eyes

@007sammieking: Youve gained a fan in me

(This story is developing, as Tiwa Savage responds to her critics on Twitter).