Cameroon: Young Cameroonians Have A Message For Biya On Youth Day 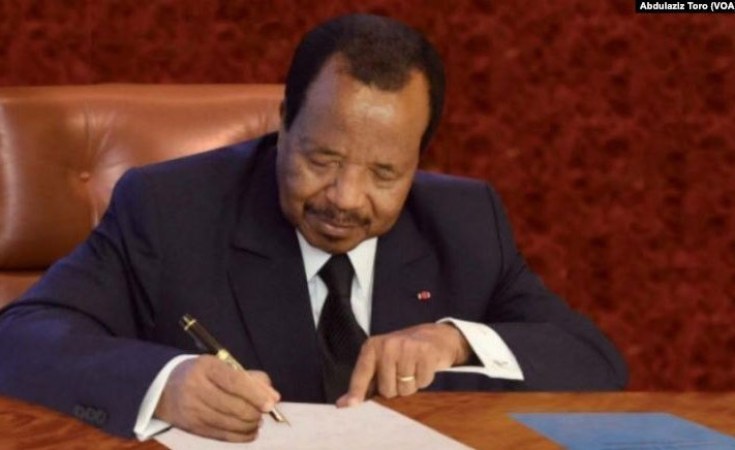 Cape Town — Although Africa has a leadership disconnect when it concerns the age of leaders and citizens, some governments have cottoned on to the best plan to change their countries' fortunes - appointing fresh, new faces to Cabinet. This is not yet a reality for Cameroon, which 38 years later, is still under the leadership of President Paul Biya.

In celebration of national Youth Day, observed on February 11, Biya addressed youth in his traditional message in which he, again said nothing new. Like previous speeches, unemployment, one of the biggest problems among young Cameroonians, featured prominently in Biya's speech.

But the youth are having none of it, as they have for too long demanded more say in politics and for octogenarian leaders to step down.

"Cameroon's President Paul Biya addressed the youths on the eve of February 11 - National Youth Day. But, most of the youths see the 86-year-old dictator as sitting on their future," tweeted Eric Tataw.

The celebration of the holiday reflects awareness and recognition of youth significance for the country, and comes two days after an election overshadowed by a partial opposition boycott and separatist violence that displaced hundreds of thousands in the region.

The elections were the first in seven years after two postponements. But a poll boycott by opposition parties and politicians means that the rule of Biya is unlikely to be brought to an end.

In his speech, Biya seems out of touch with reality. He has no idea how much the youth have been and still suffer under his rule.

A part of his speech read: "I wish to underscore this point because there are far too many places worldwide - particularly in Africa - where violence wreaks suffering on the people. We do not want this to happen in Cameroon. Our goal remains to build a peaceful, democratic, just and prosperous society."

The first celebration of Youth Day in Cameroon was held in 1962, a year after British Southern Cameroon and French Cameroon unified. But @WestCameroons, described as a " Truth & Justice Activist and Advocate for the Decolonisation of Southern Cameroonias " , does not recognise February 11 as Youth Day.

"I would like Dictator Paul Biya to also confess to the youths like he did at the Paris Peace Forum that 11th of February isn't 'Youth Day' rather the 'Plebiscite day' (the day #SouthernCameroons voted joining the Union with Cameroun) It's a National day of Mourning for #Ambazonia, read the tweet.

There is a growing people-power dynamic in Africa. Over the years dictators have died or have been falling one by one across the continent. Countries like Togo, Gabon, Zimbabwe, Gambia, Guinea, Mali, Angola and Kenya, among others, have in recent years seen dictators going through natural causes, military intervention or other forms of pressure.

Hezbon Mureithi chose to be less serious, tweeting, "Does anyone of you still doubt that PB is a Life President?" with laughing emojis.

"Ok it's so difficult to be positive in the situation we are living today in Cameroon but one thing I know is nothing lasts for long and one day we will be great again and free for real, " he tweeted.

While most commentators were outraged, some Twitter users had positive things to say about Biya's speech.

"Your excellency, One Cameroon TV makes your speech the most watched Presidential speech in the World...Bravo," read his tweet.

Partial Election Rerun Ordered in Cameroon's Troubled Regions
Tagged:
Copyright © 2020 allAfrica.com. All rights reserved. Distributed by AllAfrica Global Media (allAfrica.com). To contact the copyright holder directly for corrections — or for permission to republish or make other authorized use of this material, click here.