Nigeria: Learning from #EndSARS - A New U.S. Policy Toward Nigeria 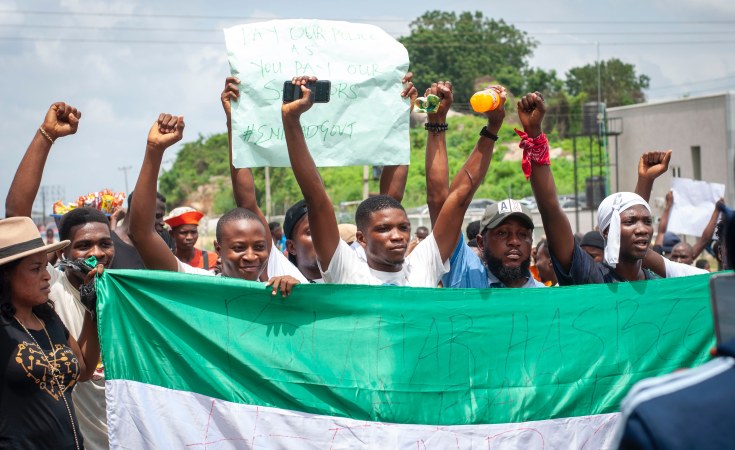 Nigerians are still reeling from the past couple of weeks, in shock after Nigerian soldiers killed more than a dozen unarmed civilians who joined in the #EndSARS protests against police brutality.

As two former U.S. officials and longtime friends of Nigeria, we were appalled by what we saw. Having spent two decades analyzing Africa’s most populous country both in and outside of government, we immediately recognized that Nigeria had crossed a rubicon.

U.S. policy ‘off course’ as Nigeria crosses a rubicon

Like many Nigerians, we expected a swift U.S. condemnation of the massacre, echoing UK and European calls for the Nigerian government to show restraint and respect Nigerians’ right to peaceful protest. But after waiting 48 hours for Washington to issue a short statement condemning the killings, we couldn’t help thinking: has U.S. policy toward Nigeria veered so far off course? And if so, how could an incoming Biden administration get it back on track?

By any measure, U.S. policy toward Nigeria under Trump has been shambolic and even toxic at times. Although the Bush and Obama administrations had their share of policy missteps, neither president referred to African nations as “shithole countries”, complained Nigerian immigrants would never “go back to their huts”, or griped about meeting with Nigeria’s “lifeless” president.

In 2018, Nigeria’s army used Trump’s own words to justify killing dozens of protestors, shooting some in the back as they fled. Meanwhile, the Trump Administration has fixated on great power competition and pushing a neo-colonial mercantilist approach to trading and investing in Africa, embodied by Trump’s “I’ve so many friends going to your countries trying to get rich” remark to a group of African leaders.

It all adds up to a fraying U.S.-Nigeria policy that is inert, ineffective, and lacks a moral compass.

This lackluster approach is especially evident in northeastern Nigeria where the deadly Boko Haram insurgency and an intractable humanitarian crisis still rage. Judging by their actions, U.S. officials don’t grasp how Nigeria’s government and military perpetuate the crisis for financial and political gain.

Turning a blind eye to military corruption, abuses, and humanitarian law violations, Washington has pushed ahead with controversial arms sales and is planning more. Missing an opportunity to promote reforms, U.S. policymakers have not pre-conditioned arms sales on Nigerian efforts to rein in abuses, compensate victims, and hold perpetrators accountable. This is a short-sighted strategy, at best.

Bayo Omoboriowo
President Trump hosts a joint press conference with President Buhari in the Rose Garden at the White House on Monday, April 30, 2018.

Under Trump, U.S. officials have also ignored the Obama administration’s demand that soldiers responsible for one of the Nigeria military’s worst atrocities - the 2015 killing of 350 protestors in Zaria - be held accountable. By glossing over this and other major human rights abuses, U.S. officials have lost sight of a bigger strategic priority: building a strong, values-based relationship with the Nigerian people.

More than this, they have also failed to stick up for core American values: liberty, democracy, and respect for human rights. Whichever way you look, U.S.-Nigeria policy under Trump has regressed across the board. This makes it even more important for an incoming Biden administration to reset the clock and repair the damage as quickly as possible.

U.S. policy toward Nigeria needs to change. The #EndSARS movement is a sharp reminder that Washington’s focus on core American values - good governance, respect for human rights, and shared prosperity - is slipping.

If Joe Biden is elected, his administration must be more responsive and skillful in engaging with the Nigerian government, but it also needs to work on rebuilding America’s relationship with the Nigerian people. To be more effective than its predecessor, it must own up to past failures and avoid making the same damaging trade-offs Trump has.

Going forward, when its values and perceived strategic interests conflict, the United States needs to justify the costs and explain the benefits of its decisions. Rather than kowtowing or finger-wagging, U.S. officials should welcome frank conversations with Nigerian government officials in which they articulate what reforms or remediation must happen before bilateral relations progress.

Most importantly, a Biden Administration should reaffirm President John F. Kennedy’s commitment to a “sincere friendship, admiration, and respect for Nigeria, its leaders, and its people” by prioritizing people-to-people diplomacy. It should do more to tap into Nigeria’s prodigious cultural, creative, and academic contributions. It should add to the list of 11 U.S. cities that have Nigerian sister cities by strengthening these programs and including communities in northern Nigeria. It should expand the State Department’s University Partnership Initiative, linking up top Nigerian universities with their American counterparts. U.S. diplomats and policymakers should also emulate their British counterparts’ highly effective use of social media and dynamic outreach to experts and public intellectuals.

Similarly, a Biden Administration should take a more holistic approach toward trade and investment. Boosting bilateral trade isn’t simply about transactions and deals: it requires sustained effort to reduce the bureaucratic red tape, as well as trade and financial obstacles that make it hard for U.S. businesses to invest and do business in Nigeria.

Recent partnerships hint at this potential: U.S. company Stripe recently acquired Lagos-based Paystack for more than $200 million as part of a plan to expand across the continent, while Cold Stone Creamery, Johnny Rockets, and Walmart have jumped at the opportunity to operate in Nigeria. These firms don’t need U.S. diplomats to negotiate deals for them - they need champions for economic reform.

Nigerians have weathered hostile, contradictory, or even absent U.S. policy before. Perhaps it is why Nigerians remain supportive of the United States after four years of Trump’s insults and misguided policies. However, Nigerian patience and goodwill toward the United States is running out. When the United States doesn’t stand with the Nigerian people, it loses the trust of one of the largest populations in the world and sources of a vibrant diaspora at home.

When the United States disrespects Nigeria, it harms a partner with considerable sway in the region and international community. Instead of repeating past mistakes or turning a blind to repression and corruption, the United States should align with the #EndSARS movement and its call for good governance, democracy, and human rights. Perhaps then, the Nigerian Army would think twice before opening fire.

Judd Devermont is the director of the Africa program at the Center for Strategic and International Studies. Matthew T. Page, a former Africa analyst for the State Department, is a consultant and fellow with the Centre for Democracy and Development in Abuja, Nigeria. He is author of “Nigeria: What Everyone Needs to Know” (Oxford University Press, 2018).