Africa: Civic Rights Were Eroded Across Africa in 2020 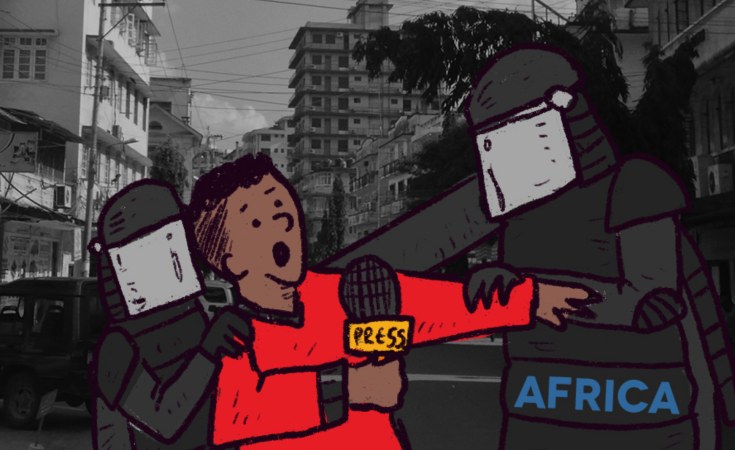 CIVICUS , the global civil society alliance, rates civic space in six Sub-Saharan African states as " closed", in 21 as "repressed" and in 14 as "obstructed". In its 2020 report, People Power Under Attack, it reports that civic space has been reduced in four West African nations and has improved in the Democratic Republic of Congo and and Sudan. Sylvia Mbataru and Ine Van Severen unpack what the report says about Sub-Saharan Africa.

Fundamental civic rights, including freedoms of association, peaceful assembly and expression, deteriorated across Africa in 2020. In its latest annual report, the CIVICUS Monitor, an online platform that tracks civic freedoms in 196 countries, downgraded four countries in West Africa. Côte d'Ivoire, Guinea, Niger and Togo have all been downgraded from the "obstructed" to "repressed" categories, meaning that people in these countries face serious restrictions when trying to exercise their fundamental rights.

Over the past year the CIVICUS Monitor has documented several drivers of civic space violations in Africa including mass protests that were met with violent repression, and electoral processes, mostly presidential elections. Violations in the context of elections often involve the arrest of opposition members and pro-democracy activists, internet shutdowns, detention of journalists and crackdowns on protesters.

In three of the four West African countries that were downgraded – Côte d'Ivoire , Guinea and Togo – constitutional changes were adopted in recent years, leaving incumbent presidents Alassane Ouattara, Alpha Condé and Fauré Gnassingbé all claiming that new constitutions allowed them to run for further terms. The process of changing constitutions or bypassing term limits led to mass protests that were met with excessive force, the adoption and use of restrictive legislation, and punishment for dissenters criticising those in power, in particular pro-democracy activists.

Niger has also been downgraded by the CIVICUS Monitor. Even though a peaceful political change of power seems likely in the elections later this month, serious questions remain about Niger's democratic prospects as human rights violations continue and civil society is subjected to restrictions.

These countries in West Africa have not been alone in efforts to muzzle dissent, exclude opposition and crack down on protests in the context of elections.  This bleak picture is further seen in Eastern and Southern Africa.

In Burundi, ahead of the May 2020 elections, state security forces and members of the youth league of the ruling party threatened, intimidated and killed opposition party members, and stifled the media and civil society organisations.

In Tanzania, as the country prepared for its August 2020 vote, the government embarked on a major crackdown to suppress dissent, including by enacting new laws and regulations to stop opposition members from actively campaigning, prevent civil society organisations and independent observers from observing the electoral process, weaken civil society and the media, and limit the use of online platforms by journalists and voters.

Despite this difficult picture, the year also proved the resilience of people and civil society in exercising their civic freedoms, leading to fundamental democratic changes. In Malawi, although the period surrounding the disputed May 2019 election was characterised by violations including internet shutdowns and repression of protests, civil society successfully contested the results, leading to a new election and a change of government in June 2020 .

However, many other African countries are moving away from holding free and fair elections. With several countries gearing up to hold elections in the coming months, civic rights violations are being reported in countries across the continent.

In Uganda, opposition members and their supporters are being violently prevented from holding rallies and journalists are being arrested and violently attacked while covering events held by opposition candidates and civil society; human rights defenders are being threatened by state authorities, including by having their bank accounts frozen and their operational licences withheld.

In Ethiopia, civil society groups have expressed concern at the crackdown on dissenting political views ahead of the general elections slated for 2021. Similarly, in Zambia, civil society has denounced an escalating trend of judicial harassment, repression and attacks on human rights defenders ahead of the August 2021 general elections. In Benin, electoral laws have been adopted that make it difficult for opposition candidates to stand in the 2021 presidential  election, which might lead to President Patrice Talon running almost unopposed.

The situation is so bleak that for the first time in a decade, according to the 2020 Mo Ibrahim Index of African Governance, overall governance in Africa has declined. The Index highlighted that, "in terms of rights, civil society space and participation, the continent had long before embarked on a deteriorating path and the pandemic simply aggravated this existing negative trajectory."

Our report, People Power Under Attack 2020, bears that out: we found that eight out of ten countries in Africa are severely restricting civic freedoms.  In reality, this means that the basic freedoms of expression, peaceful assembly and association are not being respected across the continent, meaning that when elections are held, people cannot have a real say in choosing their political leaders.

With even more elections on the cards in 2021 – in Djbouti, Chad and Somalia among others – governments should prioritise the respect of fundamental freedoms, including the right of people to express themselves without intimidation and to assemble peacefully to express their dissent. Africa's leaders should adhere to the African Charter on Democracy, Elections and Government, ensuring that free and fair elections take place. 2021 must be the year in which Africa's dismal trends are reversed.

Sylvia Mbataru and Ine Van Severen are CIVICUS researchers and contributors to People Power Under Attack 2020 .