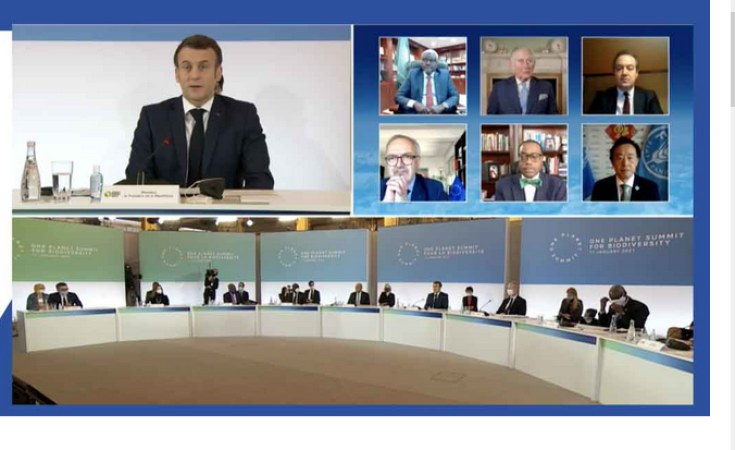 The Sahel region's Great Green Wall Initiative received a major boost from the African Development Bank on Monday. During a forum hosted by French President Emmanuel Macron and His Royal Highness the Prince of Wales, the Bank pledged to assist in mobilising up to $6.5 billion over five years, to advance the landmark initiative.

The resources will be made available through a range of programmes in support of the Great Green Wall by drawing on internal as well as external sources of funding, such as the Sustainable Energy Fund for Africa (SEFA) and the Green Climate Fund (GCF), among others.

Multilateral development partners joined the Bank in pledging funding for the African-led initiative that aims to rejuvenate life in Africa's current desert landscapes, providing food security, jobs and a reason for millions of Africans from Senegal to Djibouti to stay in the Sahel region. The forum took place in the margins of the One Planet Summit.

Climate change has led to extreme temperatures, fluctuating rainfall and drought in the Sahel, a region that is home to 250 million people living in ten countries. Millions of livelihoods and hard-won development progress are threatened.

The Great Green Wall's plan is to plant an 8,000 km long and 15 km wide mosaic of trees, grasslands, vegetation and plants across the Sahara and Sahel that can restore the degraded lands and help the region's inhabitants produce adequate food, create jobs and promote peace in the region.

A lack of finance has been the project's major constraint to realising its goal of creating 10 million jobs, sequestering 250 million tonnes of carbon and restoring 100 million hectares of degraded land in the 11 countries of the Sahel-Sahara region.

The Bank has made the Sahel region a top priority for investment and mobilising new sources of finance to advance Africa's climate opportunities. One example is the African Development Bank's Desert-to-Power programme to build the largest solar zone power in the world.

The programme will provide electricity to 250 million people in 11 Sahel countries and help protect the Great Green Wall. Over the next five years, Desert-to-Power aims to make available $2 billion for identified project opportunities for the Great Green Wall Initiative.

A lack of resources to adapt economies to the consequences of climate change is also one of the main constraints on the Sahel region's development. The Global Center on Adaptation (GCA), hosted by the African Development Bank, aims to address this by mobilising resources and brokering solutions that boost progress in adapting to climate change.

'The establishment of GCA Africa marks a critical step in our endeavour to accelerate and strengthen our efforts to address the triple challenge of biodiversity loss, land degradation and climate change adaptation on the continent. We will develop and implement joint programs that will mobilise resources at scale to support the Great Green Wall," said Kevin Kariuki, Bank Vice-President President, Power, Energy, Climate and Green Growth.

Another Bank initiative key to transforming the Sahel into a land of opportunities and inclusive green growth is Technologies for African Transformation (TAAT). The initiative aims to raise food output in Africa by 100 million tonnes and lift 40 million people out of poverty by 2025 by harnessing high-impact, proven technologies to raise productivity, mitigate risks and promote diversification and processing. TAAT, for example, has provided Sudanese farmers access to heat tolerant maize.

In a major announcement, President Macron named President Adesina a Great Green Wall Champion. Adesina was recognised for his personal commitment to addressing climate change in Africa. The position will see the Bank President play a significant role in mobilising political and economic support for the Initiative.

Pledges from others during the meeting, included EUR 1 billion of new financial and technical support to back sustainable agriculture, clean energy, water, infrastructure and private sector financing in 11 Sahel countries from the European Investment Bank and EUR 600 million from the Agence française de dévelopment (AFD).

Tagged:
Copyright © 2021 African Development Bank. All rights reserved. Distributed by AllAfrica Global Media (allAfrica.com). To contact the copyright holder directly for corrections — or for permission to republish or make other authorized use of this material, click here.