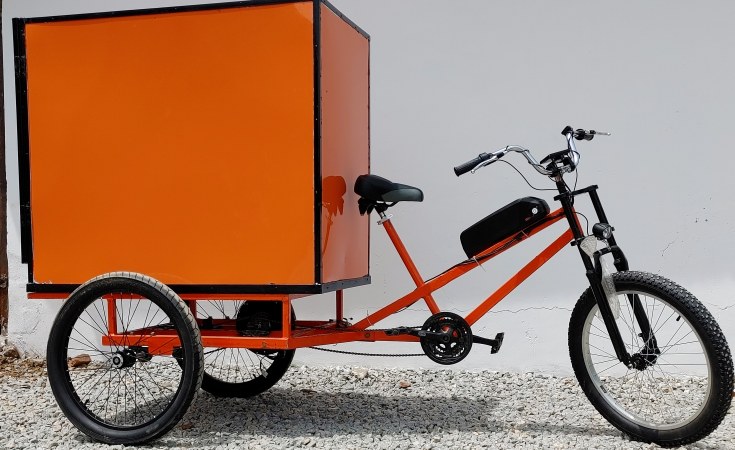 People need to move around. Whether it's going to school or buying the basics, we need to move from place to place, but how we do that moving has a profound impact on other species and the planet itself. There are many reasons for this, but a large part is due to the use of fossil fuels to power our vehicles, airplanes and rockets.

While electric vehicles could help to make the transition away from fossil fuels much faster, the changes needed to reduce emissions and avoid some of the absolute worst effects of the climate emergency require changes that are more far reaching.

A report from the Institute for Transportation Development Policy (ITDP) and the University of California, Davis (UC Davis) says that electric cars on their own won't save us - the only way we can keep under 1.5 degrees Celsius of warming is a combination of electrification and increased urban density. Researchers say electric vehicles need to be combined with a much greater effort to make cities bikeable and walkable to curb climate emissions.

And the vehicles themselves do not come without challenges. While no greenhouse gas emissions come directly from electric vehicles, they run on electricity that is still mostly produced from fossil fuels. Energy is also used in the mining of minerals that the batteries rely on, such as lithium and cobalt, and to manufacture the vehicles. Not to mention the large amounts of energy needed to ship vehicles from manufacturers to global markets. Human rights groups have also called attention to abuses in the supply chain for these minerals such as child labourers working in hazardous conditions in the Democratic Republic of Congo.

While Nigeria is Africa's largest crude oil producer, a lack of refining capacity means that the country often experiences fuel supply problems. This means that despite being a major producer of crude oil, Nigeria is heavily reliant on fuel imports.

But we are fast running out of time to slash carbon emissions and limit the worst effects of the climate crisis, and this means that moving away from fossil fuels is both a challenge and an opportunity. To keep the rise in global temperature to below 1.5°C this century, we must halve annual greenhouse gas emissions by 2030, a target that scientists say is already out of reach. This means that exposure to air pollution beyond safe guidelines will increase by 50 percent within the decade and plastic waste flowing into aquatic ecosystems will nearly triple by 2040.

Nigerian entrepreneur Olukokun Tolulope cares as much about the bottom-line as he does about social inclusion. He is the founder and CEO of ThinkElectric Africa, an organization with a mission to accelerate Africa's transition to renewable energy and sustainable transport.

He also runs Thinkbikes - a micromobility company that is manufacturing two and three-wheelers locally for last-mile transportation of goods and people. The bike sharing service operates in higher education institutions, estates and factories in Nigeria through the use of a mobile app and is driven by a passion to empower the young people in his country.

Tolulope is the fourth child in a family of five from Kajola, Oyo State in the south west region of Nigeria. He proceeded to school in that area and majored in mechanical engineering, earning a master's degree in the field. He's always been a business person at heart who had been running an ICT firm before he graduated. "I was teaching people and building software for a variety of clients, both government and commercial. During my academic years, I had a lot of fun registering two or three businesses."

But how did Tolulope make the transition from building software to electric vehicles?

On January 1, 2012, Nigerian president Goodluck Jonathan announced the removal of the government fuel subsidy. This meant a hike in the price of petrol. Most Nigerians saw only the negative impact the changes had on their daily lives, leading to a serious backlash against the government and mass protests under the banner of "Occupy Nigeria" across major cities. But the move prompted Tolulope to consider how he could get to his office without using fuel. Turning necessity into opportunity, he decided he wanted to launch an electric vehicle company.

In the midst of researching and following that desire, he decided to study computer science. "I was interested because I was already in ICT, developing software and studying mechanical engineering, and computer science gives me a different perspective to how things work. I later found myself in mechatronics and engineering departments, and have been lecturing for the past 10 ten years."

This however wasn't going to be an easy ride for him.

Just after he had converted two vehicles from gasoline to electric power, he quickly realized that retrofitting autos is rather costly. "I was not going to have a reasonable business converting cars so I had to look at what else could make a good business case for mobility, and electric bicycles came up."

Initially, he planned renting bikes to people who want to ride from one location to another. But then he realised that cargo bikes could bring in more money. This wasn't only great business, but a win for the climate too, because cargo bikes have been found to be faster and much cleaner than traditional vans in the last-mile logistics and distribution sectors.

"Now, the idea was to buy these cargo bikes. Bring them in, and start leasing them to small businesses. But the cost was too high, I couldn't afford it. That was when I challenged myself that after all, I'm a mechanical engineer, I should be able to manufacture bicycles."

His bikes offer important co-benefits such as reduced energy imports, green growth and local job creation in Nigeria.They also help reduce the health risks vehicles pose to women and children, who are more vulnerable to the impact of air pollution. And bike deliveries not only help reduce CO2 emissions, but also cut noise pollution.

"I didn't know much about climate change in 2012, but as I learned more about the situation, it became a mission," Tolulope said. "I've got what it takes. I have the knowledge and expertise to help mitigate the effects of climate change."

ThinkBikes has since received recognition in the form of several awards. In 2021, the company made it to the top 10 ClimateLaunchpad (CLP) global Grand Finals, the world's largest cleantech business idea competition. "We entered the competition from a national level to regional, then to the World Top 16," he said. The award turned up the volume for Tolulope and his project and he put his own money behind it, and resigned from his job shortly after the competition.

In 2020, Tolulope became the African Under-40 Green Award Winner and was named the Global Youth Climate Network ambassador for 2021. In March 2022, the Savvy Fellows announced Tolulope as one of the four finalists who shared the U.S. $4,450 Savvy Prize 2022 for Impact-Driven Entrepreneurs. Savvy is a virtual fellowship programme for passionate and brilliant young professionals wanting to be part of the new generation of impact entrepreneurs. It recognizes and supports the efforts of innovators working to solve some of the world's most pressing problems through innovative and sustainable ways.

He currently operates the Think Electric Africa YouTube channel, where he shares skills related to clean tech and sustainable energy. "I teach them the skills they need in order to be sustainable, such as how to create a biogas digester and how to do things in a clean way, and quite a few people have been able to make things for themselves," he said.

ThinkBikes' journey has been far from easy. This is the first time this has been done in Nigeria and was one of the first in Africa. So the company has made numerous mistakes along the way. "We don't have a standard to follow so we have to learn on the job. And we've gone to market several times," said Tolulope.

Many leaders can pull off an incredible presentation, but they always give credit to the people who helped them to shine. So does Tolulope. He believes that team development is one of the most critical aspects of running a successful firm. "Building a team is the most difficult thing in any business and the right one, I think it's a continuous thing. So basically, people who are inefficient will drag you down one way or the other. I had issues with the people I started with. They couldn't see the clear cut vision. They eventually left."

He doesn't blame them though, because new businesses take time to make money let alone profits, and compensation or benefits is the top reason employees leave their jobs at small businesses. "People run away quickly. So apart from money issues, some will not just buy into the idea. There's no specific rule for me in my books, on how to build a great team. You just have to keep the ones that you feel are good, motivate them, then be open minded. If they say they want to leave you, let them."

Tolulope has gained a lot of knowledge thus far. Due to financial challenges, the company has had to adjust various aspects of its operations, including completely revamping some of its products. He is however thrilled by how people have responded to his service thus far and at the excitement over the fact that the bikes are produced locally. "I love when a lot of people are reaching out to us to say they need our product. That's exciting for us."

The company seeks to expand beyond Nigeria in the near future and with global giants like Siemens backing them, doing so will be a bit easier.

Young entrepreneurs like Tolulope are the lifeblood of Nigeria's economy. They boost the local economy and help build a community of people with the skills, resources and networks necessary to deal with challenges that the climate crisis presents.

Desperation, according to Tolulope, prompted the start of this project. From a simple search for a faster route to his office, Tolulope's company is now handling logistical and transportation challenges for individuals and small enterprises and helping to lower carbon emissions.