Jennifer Davis, stalwart champion of majority rule in South Africa and leader in the anti-apartheid movement in the United States, who died on October 15, is being remembered for her clear-eyed focus on achieving identified goals and her determination to bring together broad coalitions of individuals working for change across Africa.. 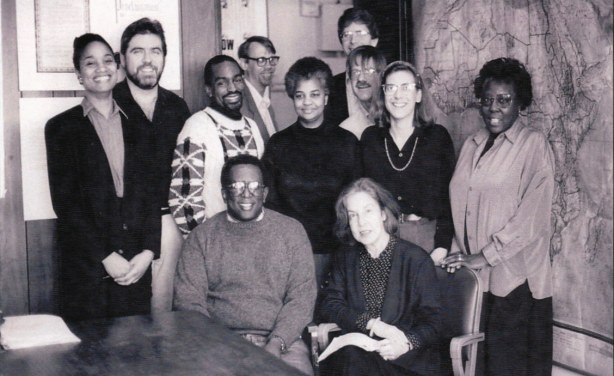 Staff of the American Committee on Africa (ACOA) and The Africa in 1992. From left to right standing: Aleah Bacquie, Michael Fleshman, Adotei Akwei, Sandy Boyer, Annie King, Jim Cason, Richard Knight, Rachael Kagen, and Deloris Ripley. From left to right seated: Dumisani Kumalo and Jennifer Davis. This photograph was digitized from the program for Annie King's memorial service at One Way Church of Christ on February 22, 2013. Used by permission of Africa Action (successor to the American Committee on Africa and The Africa Fund).