The ceremony, popularly known as MAMAs, would have been held in the Ugandan capital Kampala, on February 20, 2021. The awards were first held in 2008 in Johannesburg, South Africa. The event would have been hosted virtually from Miami by DJ Khaled, and set to air across the globe on MTV for the very first time. The awards have recognised the talent of musicians, achievers, and personalities from across Africa, including 2Face Idibia, AKA, Anselmo Ralph, Big Nuz, Cassper Nyovest, Clarence Peters, Cabo Snoop, Davido, D'Banj, Diamond Platnumz, Flavour, Gangs of Ballet. MTV has not provided any reasons for the cancellation, nor announced a new date. 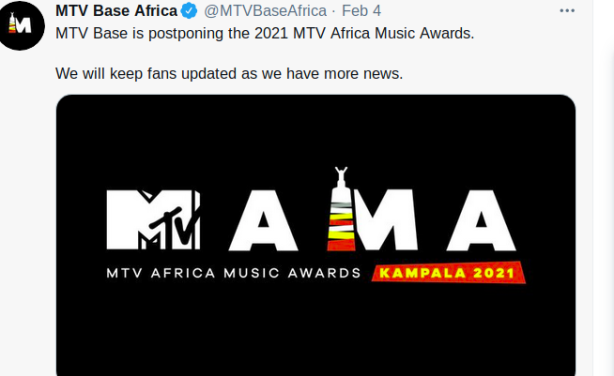 A tweet by MTV Base Africa announcing the postponement of the 2021 MTV Africa Music Awards.