President Emmerson Mnangagwa has vowed that his government would "repatriate Mbuya Nehanda's skull and the skulls of others from the UK", and said discussions about this were "on course". This comes after the Zimbabwean government unveiled a statue of the liberation heroine and anti-colonialism figurehead Mbuya Nehanda in the capital, Harare. Critics have slammed Mnangagwa's priorities as the tribute to the liberation leader was unveiled despite while the economy and health system collapse. The human remains of Nehanda and others who fought British colonisers are widely rumoured to be held at the Natural History Museum in London. However, the Natural History Museum in London is reported to have said that it had previous discussion with Zimbabwean authorities on this subject but after extensive research, have found no evidence to suggest that remains of Mbuya Nehanda are held or have ever been held by the Museum.

As one of the spiritual leaders of the Shona, she was one of the leaders of a revolt, the Chimurenga, against the British South Africa Company's colonisation of Zimbabwe led by Cecil John Rhodes in 1889. She and her ally who some historians claim was her husband, Sekuru Kaguvi were eventually captured and executed by the Company on charges of murder. 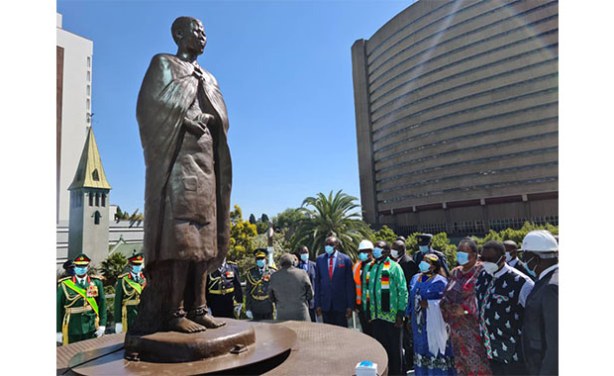 President Mnangagwa and other dignitaries (left) look at the statue of Mbuya Nehanda.