The Ethiopian government has suspended the activities of three foreign humanitarian organisations which have been working in northern Tigray. Ethiopia's Agency for Civil Society Organisations said on August 4, 2021 that it had identified rule violations by Doctors Without Borders (MSF), the Norwegian Refugee Council (NRC) and the Maktoume Foundation.

"MSF and the Norwegian Refugee Council have been disseminating misinformation on social media and other platforms outside of the mandate and purpose for which the organisations were permitted to operate," the agency said in a statement.

On the same day, Samantha Power, the head of the U.S. Agency for International Development (USAID) who is visiting Ethiopia, said in a Twitter thread that all parties "should accelerate unhindered delivery of humanitarian assistance to those affected by the conflict, and the commercial blockade of Tigray must end". Reuters reports that Power, speaking at a news conference in Addis Ababa, said she had raised concerns about "dehumanising rhetoric" with authorities. Power's visit to the country, and to neighbouring Sudan, follows warnings from U.S. President Joe Biden's administration of punitive measures against the Ethiopian government if aid is unable to reach the Tigray region.

Power's visit coincides with a visit by new United Nations Emergency Relief Coordinator Martin Griffiths, who ended a six-day mission to the country with a fresh push to get badly needed food and other supplies into Tigray, which has been in conflict with the Ethiopian government since November 2020. 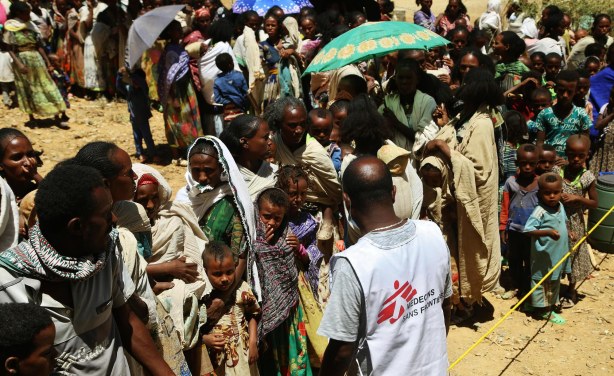 An MSF translator asks people to line up to wait for medical consultations at a mobile clinic in Adiftaw (file photo).