A three-part series by GroundUp examines the plight of the Wild Coast region in the Eastern Cape, where community members have been battling for years against industrial projects that threaten the region's environment and community members' land rights.

The proposed N2 Toll Road, which would cut through the Sigidi community, has caused division. Fanele Ndovela of Xholobeni Youth for Sustainable Development supports the project because it will unlock new opportunities for subsistence farmers to sell their produce at the markets. But he says that South African National Roads Agency's (SANRAL) engagement with stakeholders is flawed. "Any agreement should be with the community", he says. Meanwhile, members of he Amadiba Crisis Committee (ACC) said they oppose the road because it will cut the community in half, and pollute the environment they depend on for their livelihoods.

The toll road project comes after a protracted land rights saga between Xolobeni residents and mining companies. In 2002, rare minerals were discovered on the Xolobeni coast. Mineral Sand Resources (MSR), a subsidiary of Australian company Mineral Commodities Ltd (MRC) applied to mine them.

Although mining rights were initially granted by the Department of Minerals and Energy in 2008, the decision was suspended after legal interventions by the ACC and the Legal Resources Centre. The rights were revoked in 2011. However, in March 2015, MRC filed another Mining Rights Application, through a subsidiary, Transworld Energy and Resources (TEM).

One of the topics which divides the community is the issue of possible jobs from the mine. The executives, politicians, and project managers that visit the area to campaign for support for the mine and a toll road insist that the developments would create opportunities for jobs. Richard Mtwa, who opposes the mine, says that by running after jobs his fellow residents are taking what they have for granted.

"Both these projects will disturb our peaceful lives," 68-year-old Thembekile Dlamini told GroundUp. Dlamini was born in the village and has survived through subsistence farming. "At this age, I'm supposed to be in one place and not be moved up and down. We will be forced to leave our houses that we built for our families. We live healthy lives. At this age, I still plant vegetables and I enjoy doing that." 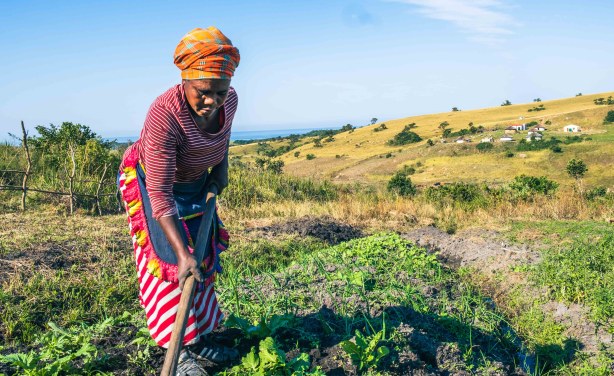