At least 23 women leaders are eyeing coveted governor posts in the 2022 elections, raising the possibility that more counties could have women leaders, compared to only three that have been at the helm since the implementation of devolved governments in 2013.

Unlike the past two general elections where only a handful of women vied for what is regarded as the second most powerful political office in the land after the presidency, nearly two dozen women have declared interest in the county seats, signalling a tough contest for their male rivals.

The only women to have occupied the office are Joyce Laboso, former Bomet Governor, who died in office, Kitui County boss Charity Ngilu and her Kirinyaga counterpart Anne Waiguru.

Besides Waiguru and Ngilu who plan to defend their seats, Martha Karua, is also a contender for the Kirinyaga seat, even though her name has featured in the lists of running mate position for other presidential aspirants.

No woman, so far, has declared interest in running for president, writes Justus Ochieng for The Nation. 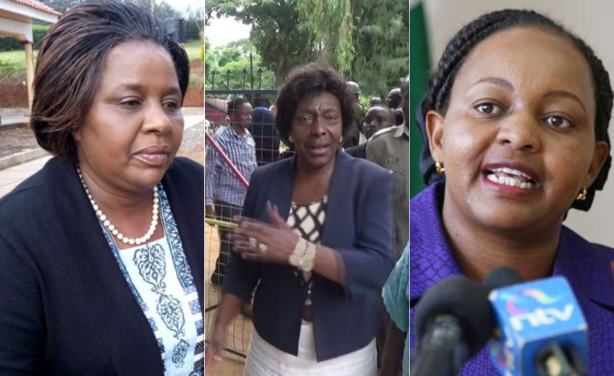 The only women to have occupied the office (from left) Joyce Laboso, former Bomet Governor, who died in office, Kitui County boss Charity Ngilu and her Kirinyaga counterpart Anne Waiguru (file photo).